Macarons are the new cupcakes

Cupcakes are hot. Pop culture has elevated cupcakes from kindergarten birthday party to wedding cake status in a few short years. Cupcakes are fun, tasty and easily decorated, with a superb frosting-to-cake ratio. Everyone can enjoy cupcakes; in addition to the regular butter/sugar/flour varieties, there are vegan, sugar-free and gluten-free versions, plus some permutations of the three. NPR provides a more academic analysis of why cupcakes have shot to popularity.

The New York Times, enamored with all things Maine, pushed whoopie pies as the next big thing in dessert back in March. That prediction has yet to come to fruition. Why? Whoopie pies are ugly. Despite the naughty-sounding name, there is nothing sexy about even the prettiest whoopie pie. Whoopie pies have little potential for creative toppings or decoration. The best ones are wrapped in plastic wrap and sold in convenience stores; ask any Mainer who makes the best whoopie pie and the answer will be a) his grandmother or b) the gas station down the road.

I argue that macarons are the next big thing. Macarons (not to be confused with macaroons), are cookie-like French confections made by sandwiching cream, ganache or almond paste between two wafers made from egg whites, almond powder and confectioner's and granulated sugars. As you can see from the chart below, macarons have increased in search popularity over the past five years, a trend that continues to grow: 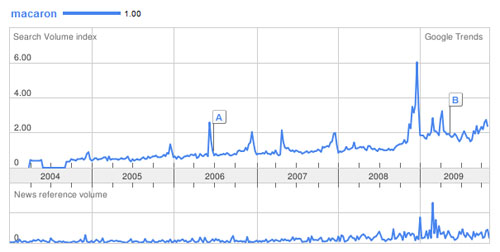 Like cupcakes, macarons are cute, colorful, portable, single serving-sized bits of goodness. They are also extremely versatile, with flavors ranging from lemon to mocha to pistachio raspberry- even bacon. Their colorful stackability makes them a natural subject for blog headers and Twitter backgrounds. Plus, "Sex and the City," credited in part for catapulting cupcakes to mass popularity, even featured macarons in one episode, an indicator of macarons' commercial potential.

I had never heard of macarons until a few months ago; now I see them all over the internet. They certainly have more elitist origins than cupcakes, being both French and difficult to bake (first-time macaron makers often complain that their macarons lack "feet", the ruffles around the bottom of each cookie), which I see as the only potential drawback. Otherwise, macarons are just one SNL reference away from international cult status.

Just a theory. What do you think?

Other people's thoughts on the matter:

To me, widespread success of the macaron depends on its allergy-safe versions. Because while you can make any type of cupcake to suit your needs, people who are allergic to peanuts/nuts (like me) cannot consume traditional macarons because of the almond flour.

That is a great point! I just did a little research and came across versions made from sesame and coconut: http://www.bakingobsession.com/2009/10/26/nut-free-french-macarons/ You can have macarons too! Plus, since macarons are gluten-free by nature, the celiac crowd doesn't have to worry either. That just leaves out the vegans, though the popularity of bacon shows that vegans don't have much say in food trends anyhow.

Researche des macarons is an ongoing obsession with me...ahem
For example just one post of many, way too many-
http://parisbreakfasts.blogspot.com/2009/11/macaron-inventory-day.html
Love your graph!
Carolg

Gorgeous watercolors! You show macarons' artistic potential- another argument for why they could be the next cupcake!

Macaron has been the "cupcakes" in Paris for a long time. The lines in front of laudree and pierre herme is longer than that in front of Magnolia. That being said, chances of it being a trend in the US migh not be high. We don't have widespread availibility and good macaron is difficult to make, so not a lot of people have the chance to sample truely good macaron.

But then again, you don't need to be truely good to start a trend in the food world. Just good enough. Look at starbuck.

Thanks Helen,
There is some serious equipment required to make the macs properly. The ones that spit out perfect macaron lids. The almond flour too is a stumbling block in the US.
And too much SUGAR!!
a tad depressing it is.

[...] Francisco Chronicle Staff Writer Stacy Finz found some believers this May.  Helen of Foodista also argues the point, noting that the adorable treats are attractive, portable, convenient, and [...]