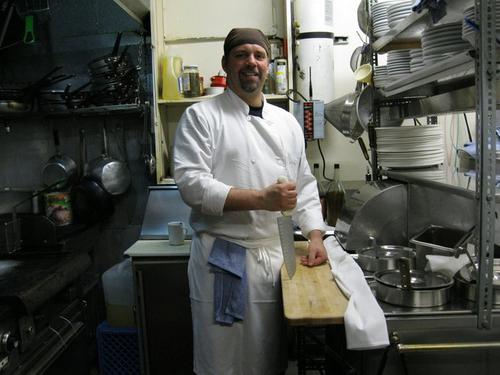 Chef Damian Cardone, claiming to be the former executive banquet chef at the now-closed New York City restaurant, Tavern on the Green, admitted on his Facebook profile on March 10, 2011, that he has on multiple occasions misled his gluten-free customers. Cardone wrote that he has often served guests requesting gluten-free pasta a dish containing fresh pasta made with high-gluten flour. His findings? That no gluten-eschewing guest has ever complained of distressing symptoms following a meal at his table. View Cardone's rant below:

Though we have not been able to verify this information, Cardone claims to have cooked for a number of Hollywood A-Listers, including Billy Crystal, Sigourney Weaver, Martin Short, Tom Hanks, and George Clooney. The Colorado chef similarly states that he has appeared on Live! with Regis and Kelly and Project Runway.

We have contacted the former owner of Tavern on the Green to confirm Cardone's employment, but have not yet heard back. We continue to investigate this story for accuracy and will update you as we uncover further details.

**Update: 1:39 PM PT- Damian Cardone has taken down his Facebook profile. Below is the original text of his admission:

"Gluten free is bullshit!! Flour and bread have been a staple of life for thousands, THOUSANDS of years. People who claim to be gluten intolerent [sic] dont [sic] realize that its [sic] all in there [sic] disturbed little heads. People ask me for gluten free pasta in my restaurant all the time, I tell em sure, Then I serve serve em our pasta, Which I make from scratch with high gluten flour. And you know what? nothing, NOTHING! ever happens! People leave talking about how good they feel gluten free and guess what, They just had a full dose! Idiots!" 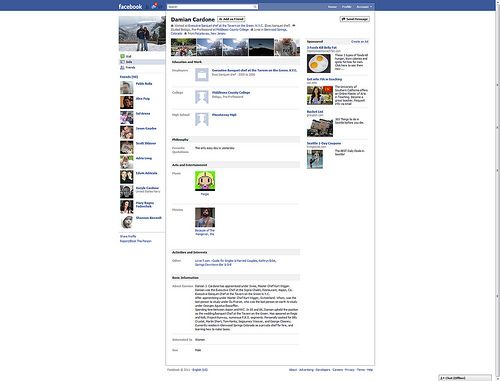 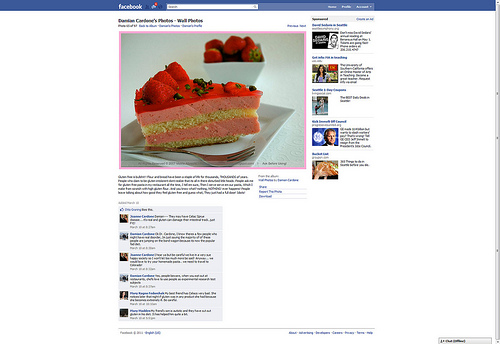 Dr. Fasano claims that gluten sensitivity is in fact a real condition, although all he's done is to conduct controlled research to measure and analyze the physiological response of the test subjects.

Cardone has done the real work here, lying to his customers about what he's serving them and then assuming, because they don't have an immediate violent reaction, that they must be wrong. Thanks goodness we have thoughtful, intelligent people like him deciding what is and is not a problem for other people.

Lastly, why are you investigating his claims? Based on his statement, he's clearly more than willing to lie. If he makes those other claims, then it's on him to validate them, otherwise there's no reason we shouldn't assume that he's lying about that stuff as well.

What a creepy way to do business.

As a recently diagnosed "gluten free" eater, I can say that the reaction takes about 2 - 4 hours for me, and if someone told me I was getting gluten free I would assume it was another ingredient I inadvertanly ate elsewhere than the "gluten free" dish.

People mistake the allergy for something like an anaphalactic shock sort of allergy, when instead it's like lactose intolerance, digestive upset.

If he's that upset about the 'gluten free' dining, he should just make it clear he doesn't cater to such diners and they can easily choose to eat elsewhere.

That's just evil. If he weren't such an ignorant fool he'd know that a gluten reaction takes hours to develop.

I am so glad you are investigating this. I really would like to know if he is who he says he is and I hope this gets a lot of attention. I hope it warns other chefs that they better educate themselves!

I am so glad you are doing a piece on this. Giving gluten to someone with an allergy could be life threatening. And glutening a Celiac can reap consequences for life. This man should be fired!

I can't imagine someone lying to me and then spending the next week hearing my daughter scream in agony because of a deliberate action. Why not just give her ecoli or something else just as fun. I hope he never gets hired by anyone with a disorder that he does not believe in.

Wow. Wow is just about all I can think to say right now! He is asking for a HUGE lawsuit! If it bothers him so much that people ask for gluten free then why is he working at a place that offers it? He is an idiot.

I hope he gets fired fast because that restaurant is going to get sued.

The extent of damage this uneducated (literally) man has caused is far reaching. In addition to his own admission of intentionally causing harm- essentially poisoning customers- former co-workers will certainly come forward. This is an excellent case for an attorney to take one. Too bad this isn't a career that is regulated by professional licensure. If it were- he should lose it.