The Charoset Debate: East versus West 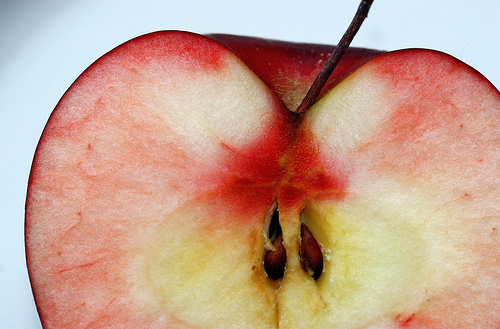 Charoset, a quintessential part of the Passover Seder representing the mortar used to build the Egyptian storehouses, is a sweet chutney-like combination of apples, nuts and kosher wine. A subject of debate for centuries (charoset is the only part of the seder meal which is not expressly described in the Torah - only in the Talmud) its variations are equally surprising.

In the Ashkenazic (Eastern European) tradition, charoset is made from diced apples and dry roasted nuts (usually walnuts), dusted with cinnamon and sweetened with just enough wine to form a coarse, juicy, crunchy condiment that is most akin to a fruit salad. In the Sephardic (Mediterranean/Iberian) tradition, charoset contains dates, raisins, figs, almonds instead of walnuts, fragrant spices like cardamom and cloves, as well as honey - before being pureed. While the Sephardic recipe lends itself more to the historical connection to mortar, both are quite delicious and can spark a heated debate at the Seder table. 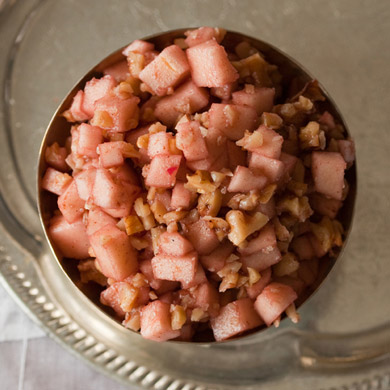 In a large bowl, combine all ingredients, mixing well to evenly distribute brown sugar and cinnamon. Mixture will be loose and juicy, without a lot of extra liquid.

Refrigerate until ready to serve. 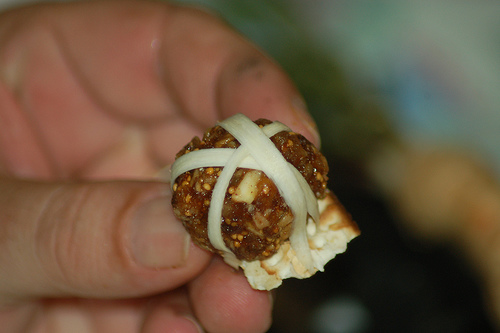 Sephardic-style Charoset rolled into a ball, wrapped in horseradish...

In small batches, chop dried fruits and spices in a food processor, adding pieces of apple and nuts to each batch.

When well combined and still somewhat coarse, knead by hand, adding wine to moisten until mixture can be rolled into firm balls.

Roll the mixture into tablespoon sized balls and refrigerate until ready to eat!

Photos by Muffet, Lara Ferroni and Carly and Art