A popsicle can be a nostalgic treat in the warm summer twilight. While enjoying one, can't you just hear the crickets chirping, and the salty bay water gently lapping onto the dock across the street while lightning bugs glimmer in the yard? Well, I can. Maybe you're not having the right kind of popsicles.

You might try these. These popsicles and frozen treats have a little kick - provided by various alcoholic ingredients. You can serve them at happy hour. Just keep them separate from the kids' desserts.

First up is a Gin and Ginger Granita. For me good time, relaxing porch-sittin' involves a nice gin and tonic. This frozen version is even better.

What You Need:
Note: 1 "part" in this recipe refers to 1 shot glass's worth of an ingredient.

What to Do:
Throw all the ingredients in a blender and pureé.
Pour into ice cube trays and pop them in the freezer, and let them freeze overnight.
The next days, you can transfer your gin 'n' ginger cubes into a bowl and crush with a fork. They should decompose into a perfect crushed ice texture.
Divide into small bowls and serve. 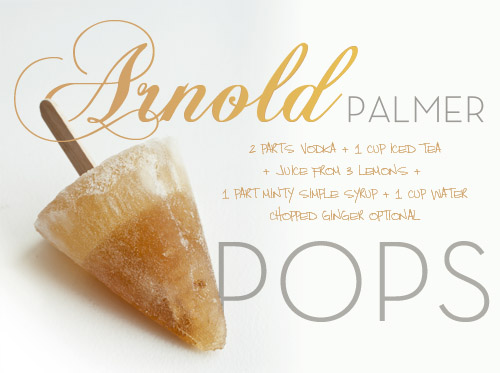 My family spends a lot of time watching golf in the summer time. Especially my dad who enjoys doing so with his eyes closed while horizontal on the couch. I'm not much of a golfer, but I do applaud the golfer-inspired beverage choices like the Arnold Palmer. Especially frozen and combined with vodka.

What To Do:
To make the lemonade, squeeze the juice from three large lemons into a pitcher.
Add in one part minty simple syrup (you can use more if you like your lemonade sweeter, so give it a taste) and the 1 cup of water and remaining 1 part vodka.
Place it in the refrigerator to keep it fresh while you're dealing with the iced tea portion.
Combine the Iced tea and 1 part vodka in a small pitcher or measuring cup.
Pour this mixture into your popsicle forms, only filling them half way.
Pop your half-filled forms in the freezer. When they are starting to freeze but still slushy (give them about 2 hours), stick the popsicle sticks into the centers of each form so that they stand upright.
After the iced tea half-popsicles have frozen, pour the rest of the molds full with the lemonade.
This is how you will get the two-toned effect you see in the photo.
Let them freeze overnight. 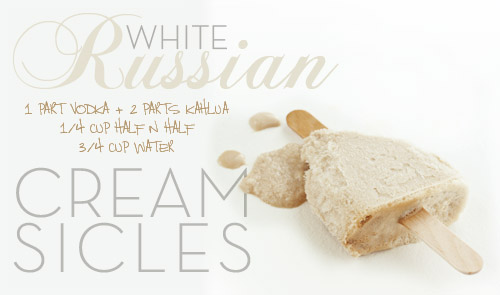 The White Russian drink has a special place in my heart. I love the creaminess combined with the deep richness of Kahlua. This drink is just asking to be made into a creamsicle. So let it be done. And eaten:

What To Do:
Combine all ingredients in a pitcher or large measuring cup and stir to combine.

Pour into popsicle molds and stick them in the freezer. After the are partially frozen (allow a few hours depending on the temperature of your freezer), place the popsicle sticks in the center so they stand upright.