The Flaming Lips "Gummy Song Fetus" EP is a three-song EP released via a thumb drive hidden inside an edible gelatin fetus. The band tweeted the photos below on July 27, just after the "fetuses" had been dropped off at GuestRoom Records in Oklahoma City.

The three songs on the Flaming Lips USB drive are "Steven's Moonbow," "Squishy Glass" and "Enthusiasm for Life Defeats Existential Fear Part 2." The songs have also been released online; check them out here.

Do you think this method of music presentation is provocative and groundbreaking or offensive and in poor taste?

Editor's Note: please note that Foodista is not endorsing the promotional activities of this band. The author is merely reporting a story. 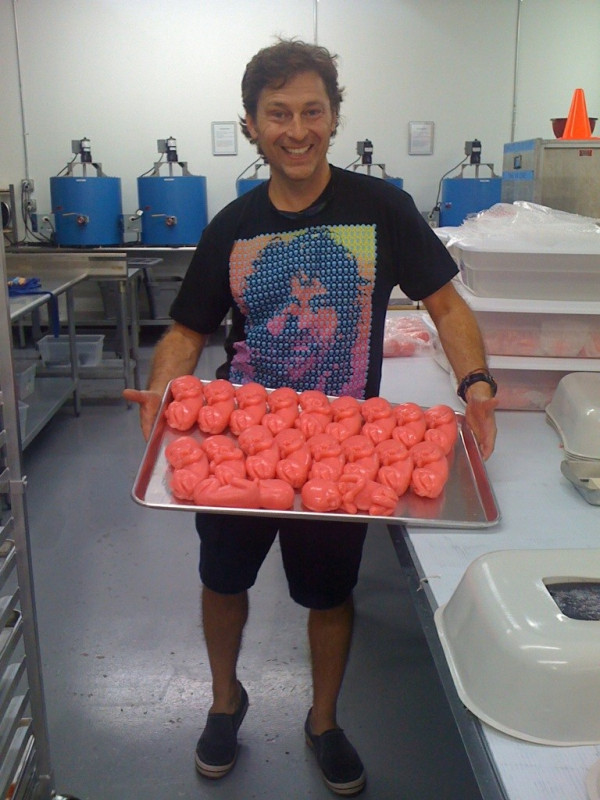 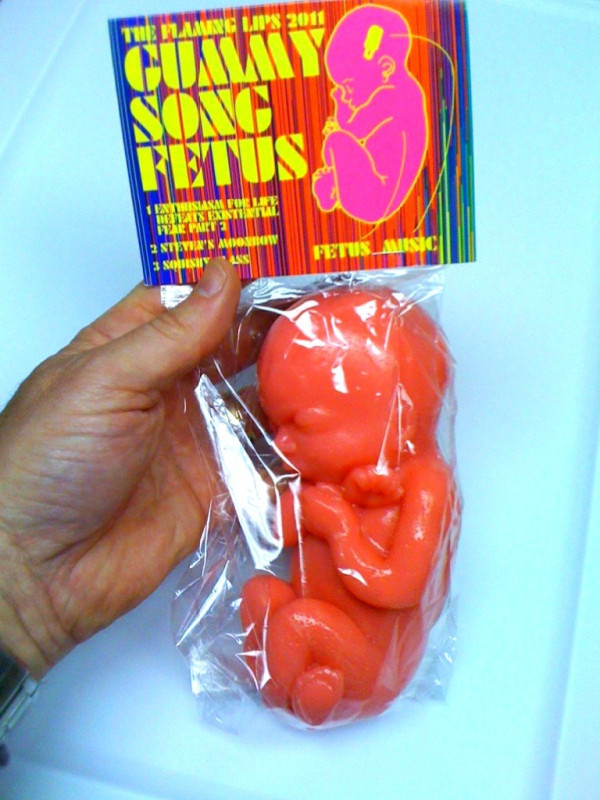 It is very disturbing and disgusting. This world already shows a lack of respect for unborn babies, this is just another step along the road. Very sad.

This is the most offensive thing I have ever seen. I will be deleting this page and unliking you on Facebook. You would think if you had given this half a thought you wouldn't have to ask the question.-

That you even ask the question speaks volumes about the total lack of respect for human life this country has. That these idiots did this in the name of "art" speaks volumes as to their level of maturity and the quality of management they employ. Yes, before the idiots start spouting of about freedom of speech, they have the absolute right to be stupid....but not without consequences. Good luck with that.

I'm so disappointed. Just because we CAN do something, doesn't give us the justification to do so.

This is so disturbing on multiple levels. I have enjoyed Foodista for a good while now, as a fresh take on food presentation, recipes, and the food industry. I don't really see how this qualifies, other than the horrific reality that one must devour the likeness of a fetal human to get to a new music release?

I am so disappointed that this is what you feel your readers are interested in. I really thought you'd hold us in higher regard.

Permalink Marissa Brassfield
July 25, 2011
Food for thought: Some artists and musicians prefer to market themselves through shock. Madonna did it in the 80s, Lady Gaga does it today. I wrote this piece looking through that lens, aiming to introduce some of the ways that musicians are marketing themselves in light of the digital music and music-pirating revolution.
This band, The Flaming Lips, chose to release a new album in an edible format to reduce waste (gummy wrapper, reusable USB thumb drive), but make the image a provocative and shocking one. We don't know whether the band's intent was to shock or just build buzz, but judging by the comments here it's worked -- if they released an album in a gummy bear instead, we might perhaps be praising them for their cleverness.
I understand the sensitive feelings some have about fetuses, but remember that we were all fetuses once.
Would the album have been less offensive if it were a gelatin version of an animal fetus? Many of us actually eat baby mammals in the form of veal and other delicacies.

I would not want to eat on just to get to the music. But I think it was a cool idea. And it's not much worse then all the human organ shaped gummies that come out a round Halloween. If you don't like it you don't have to buy it. I appreciated the article!

you know i think everyone on this page who has something negative to say or says they have no respect for human life ... get the hell over it really!! WE have no respect for human life im sorry but million are starving and still people here in the us are have 4,5 maybe more kids! thats (pardon my language) fuc**** stupid! grow up this is nothing take a look at the real picture the world is going to shit because people dont care not because of this or other little things.

You people clearly don't listen to The Flaming Lips

Oh my god, what a bunch of whiny little bitches.

I think it is AWESOME and I definitely wish I could eat one. XD XD