Alec Baldwin aired his beef with a Starbucks employee via Twitter on Wednesday night, tweeting, "Starbucks on [redacted]. Uptight Queen barista named [redacted] has an attitude problem." Baldwin followed his tweet up by complimenting Clyde, an employee at Dinosaur Barbecue.

In an attempt to confirm the barista's name, E! visited the Starbucks Baldwin called out; unfortunately, employees at that location said that the worker in question wasn't there during the actor's visit. Was it right for Alec Baldwin to call out a stranger (and a major global brand) on Twitter? 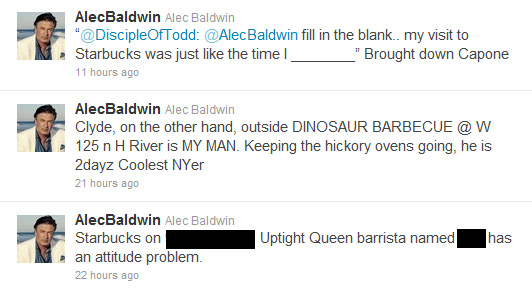 Wait, was the barista a guy or a girl? Because if it was a guy, calling him a "queen" was not cool, Alec.

I omitted the name here, but in the original tweet, it's a three-letter nickname you might use for Jason, Justin or any other J name. Probably a guy.

Really? Prince Alec didn't get is clearly not, non fat latte. This guy is kinda a jerk.

Seriously, do these so-called "actors" think anyone really care about what they think?