Every once in awhile you will open a cookbook and be blown away.  Not necessarily by the beautiful glossy photos but by the wealth of information that only comes from expertise and experience.  This was my reaction when I read the first chapter of Michael Ruhlman's new book Ruhlman's Twenty; 20 Techniques, 100 Recipes; A Cook's Manifesto.

There are very few books that are aimed at the novice cook as well as the experienced one.  The book is organized, as the title suggests, by technique rather than the traditional method of appetizers to desserts.  This organization is key, rather, the point of the book- by mastering cooking techniques you can essentially tackle any recipe.

For example, in his chapter on water, Ruhlman shows the various ways this ubiquitous and under appreciated liquid is used in cooking.  The chapter covers direct cooking (boiling, steaming, poaching), indirect cooking such as the use of a water bath, cooling or freezing, the sous-vide method (cooking food in a vacuum sealed pouch in temperature controlled water), how to make and use a brine, and finally using water as a flavor extractor (as in stock).

Moreover, the recipes from the same chapter range from simple to more involved.  You will learn how to make stock, a basic cooking technique that everyone should master, to cooking meatloaf in a water bath, to then more complicated recipes like weekday coq au vin and pastrami short ribs.  Each recipe illustrates a different technique that then can be applied to other foods.  Not every recipe is easy (you will find one for making your own bacon below), but think of each one as a building block to becoming a better cook.

Whether your musing in the kitchen have encouraged you to experiment and be adventurous or you are just starting out, Ruhlman's Twenty is a remarkable culinary resource. 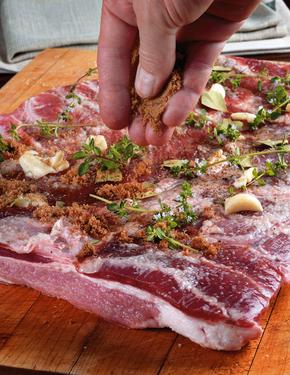 Making your own bacon is as easy as marinating a steak. When you do, you’ll find out what true bacon is all about, as opposed to the brine-pumped, water-logged versions available at the supermarket. It’s about the power of salt. American bacon is traditionally smoked. If you have a conventional smoker or a stove-top smoker, by all means use this instead of your oven. In Italy, most bacon, pancetta, is not smoked, though it’s often dried. But smoke is by no means the critical part of the preparation.

With most salt-cured items, it’s important to balance the salt with sugar or some kind of sweetener. I like to use brown sugar, just enough for balance, not sweetness. Bacon that will be smoked benefits from sweetness, but here you want the savory notes of the garlic and herbs to come though.

Traditional bacon has a curing agent, sodium nitrite. Sodium nitrite is not a chemical additive; it’s an antimicrobial agent that prevents the growth of harmful bacteria, keeps the meat rosy, and gives bacon its distinctive flavor. The vast majority of nitrite in our bodies comes from vegetables, which pick it up from the soil. In the preparation here, the sodium nitrite is optional; be forewarned, though, that if you don’t use it, your bacon will be the color of a cooked pork chop, and it will have a much more porky flavor to it, more like spareribs than bacon.

Pork belly takes about a week to cure and requires a two-part cooking process. First, it’s slow roasted or smoked to cook it through. Then it is typically cooled, sliced and sautéed to render the fat and crisp it up.

Below are two excellent cures: one savory, more in the style of Italian pancetta, and a sweeter honey-mustard cure. I find the sweet cures to go well with traditional smoked bacon, so if you intend to smoke the bacon, use the sweet cure. Otherwise, I would use the savory cure. Both work beautifully however you want to finish your bacon.

To make the cure: In a bowl, combine all the ingredients for your chosen cure.

Place the pork belly in a large resealable plastic bag, about 2 1/2 gallons/9.5 liters, or in a nonreactive container of the same capacity. Rub the cure all over the pork. Seal the bag or cover the container and refrigerate for 7 days, occasionally rubbing the meat to redistribute the seasonings and turning the bag or the belly every other day.

Remove the belly from the cure, rinse well, and pat dry with paper towels. Discard the cure. The belly can be refrigerated in a fresh plastic bag or wrapped in plastic for several days until you are ready to cook it.

If roasting the pork, preheat oven to 200°F/95°C. Place the meat on a rack on a baking sheet/tray. Roast until the internal temperature reaches 150°F/65°C, about 2 hours. Begin checking the temperature after 1 hour. (If you have cured a belly that still has the skin on, slice off the skin now while the fat is hot; save it for stocks and stews such as the Winter Vegetable Garbure.)

Let the bacon cool to room temperature. Wrap it well in plastic wrap and refrigerate until chilled. The bacon can be kept in the refrigerator for up to 2 weeks or cut into slices or chunks, wrapped well, and frozen for up to 3 months.

When ready to use the bacon, cut it into 1/8-inch/3-millimeter slices or 1/2-inch/12-millimeter lardons and sauté slowly until the fat is rendered and the bacon is crisp.