The list of descriptors attached to the flavor of wine is vast, dizzying, puzzling, and often the sum of the parts add up to something meaningless for the vast majority of wine drinkers. "Redolent with boysenberry syrup, whiffs of freshly applied highway asphalt, and notes of steeped bergamot," or something along those lines. At a recent seminar exploring the wines of Spain's Castilla-La Mancha region, Karen MacNeil, a wine educator, consultant, and writer who led the proceedings, got me thinking about things a bit differently.

MacNeil is the author of The Wine Bible, which has sold more than a half-million (!) copies. The one I own is dog-eared and a little beat up from use; a good sign, in my mind, of the usefulness of a reference guide. She piqued my interest when she started talking about how scientists have people describe flavors as sounds. Does a flavor shout at you or whisper? When I think of a full-throttle Shiraz from Australia, I'm definitely thinking shouting. A dry rosé from Provence? More of a whisper. (I have to confess that my mind started to wander and I couldn't help think of the saxophone riff from "Careless Whisper" by Wham!. I also thought about my fellow Foodista contributor, Warren Bobrow, the Cocktail Whisperer.) 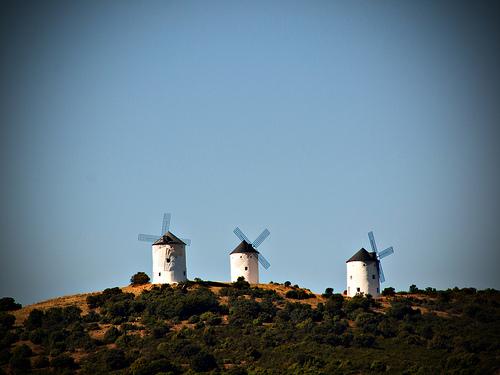 What does MacNeil want to hear from a wine? Well, she wants it to be "distinct and precise" like "the sound of a church bell in the mountains." (That's pretty vivid.) But as we all got a little sentimental, MacNeil brought us down from the mountaintop with some surprising facts about Castilla-LaMancha. First of all, it's big. Really big. (Here's a map for some perspective.) One hundred times larger than Napa, Castilla-La Mancha is one of the top ten largest contiguous vineyard areas in the world. And the average age of the vines is over 40 years old, which is astonishing for an an area so large.

Castilla-La Mancha is also known for its altitude. With vineyards from 1,500-3,000 feet above sea level, the temperature at night cools off dramatically; in some instances there can be a 50 degree shift between the daytime and nighttime temperature. This is significant because cool nights preserve acidity in the grapes, which provide structure to a wine. Or, more simply put by MacNeil, acidity in a wine keeps it from tasting like "a big blob, like flat Coke." Cool nights also extend the growing season; as MacNeil elaborated, complexity in wine comes from the grapes getting enough time to develop nuances as they ripen. Just like children, you don't want your grapes to grow up too fast. 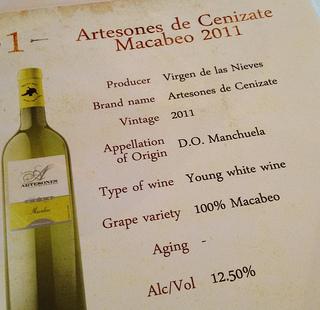 And if you're putting two and two together, thinking, "La Mancha, windmills, where's Don Quixote?" Castilla-La Mancha was the stomping grounds for this legendary literary figure. All I know if I was riding around on a horse in that heat, I'd want a powerfully refreshing wine at the end of the day. Instead of tilting at windmills, I recommend trying a wine made from Macabeo. Normally it's a grape you would encounter (unnamed) in a bottle of Cava, Spain's most famous sparking wine. The version I had, the 2011 Artesones de Cenizate, was fresh, fruity, and lively. Not a shouter or a whisperer, but definitely spoke with a soothing cadence.