Cheese gougeres, especially when pillowy and freshly baked, are a lovely accompaniment to a glass of wine. But what kind of wine? Red? White? Dare I suggest a sweet wine? Ok, I will. Because this is my kind of wine and cheese pairing. Thanks to Planet Bordeaux, I got the chance to visit that storied wine region in France with other members of the wine media, and taste a lot more than just red wine. And even among the red wines I tried, the majority were modest in price, populating the $10-15 range. A visit to Chateau Bonnet was fairly typical of showcasing the quality and tastiness of wines simply labeled (along with the name of the winery) Bordeaux or Bordeaux Supérieur. 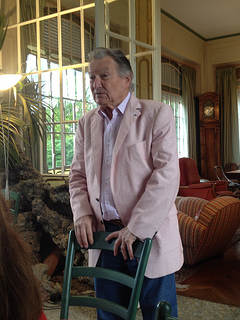 One of the places we stopped at was Chateau Bonnet, owned by Andre Lurton, a legend in Bordeaux. Not only does he live at the Chateau, but resides in the same room where he was born! I like how he described the Chateau Bonnet wines: "Easy to drink, easy to understand." This was certainly the case for the white, rosé, and red wines we tried. The whites are a blend of Sauvignon Blanc and Semillon, with a touch of the highly aromatic grape, Muscadelle. Rosés and reds were a mix of equal parts Cabernet Sauvignon and Merlot. The whites beg for seafood or a porch, the rosés are of a more of a sturdy style that could handle chicken, pork, or even beef, and the reds are perfect for something informal like a burger. 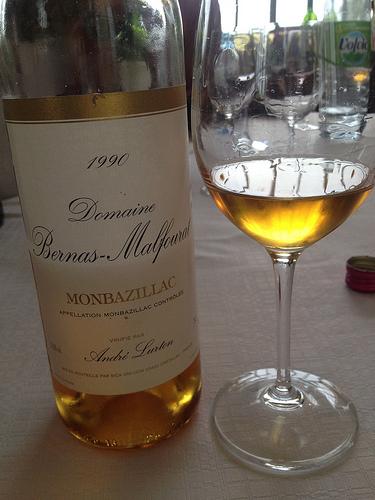 But the true star of the show was a rare sweet wine. Though not from Bordeaux, but rather the nearby region of Monbazillac, the 1990 Domaine Bernas-Malfourat was a golden treat. What was really interesting was how well the wine went with cheese gougeres. Kind of like how a sweet wine is a great foil to pungent blue cheese, the Bernas-Malfourat was a nice contrast as well. And with two decades in the bottle, the Bernas-Malfourat had acquired a slightly nutty character that went well with the cheese.Though the gougeres could have used a riper, more powerful cheese to make a perfect match with the wine, the sweet/salty yin/yang was memorable. A whole lot of contrasting and complimenting in such a tiny, bite-sized package!

I don't, however, want the rest of the wines to feel slighted. The gougeres were also nice with the red wines, especially a 2008 Chateau Grosshombre. It was the perfect bite of food to tame the youthful exuberance of this young red wine. Now if only I could have stuffed the tiniest of burgers into my gougeres. (Though that may have been considered blasphemous.)

Freshly baked cheese gougeres and warming wines from the modest and everyday to the sweet and sublime? A great way to spend and afternoon that was only gloomy in appearance.

From cheese gougeres and sweet wine to the tiniest of shrimp with star anise? Yes, that's Bordeaux. I look these shrimp in the eye and then eat them. And drink a fantastic and affordable White Bordeaux. Read about it on jamesonfink.com. 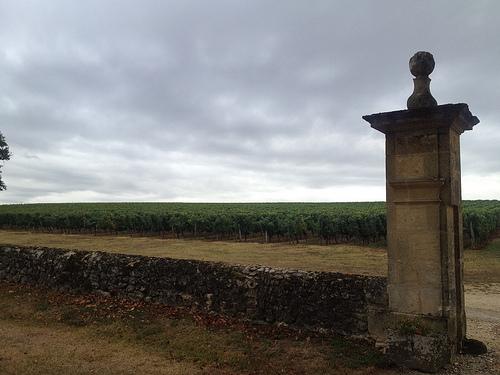