Anybody who likes a country-pop break-up song will want to know the diet habits of Taylor Swift (because somehow those things just go together). Swift recently spoke to Bon Appétit to reveal the contents of her fridge and talk about her typical diet while out on the road.

The singer reveals six items that can always be found in her fridge, which include eggs, thinly sliced chicken and ham, orange juice, diet coke, Parmigiano cheese and cinnamon rolls or cookie dough, "because I'm that girl." 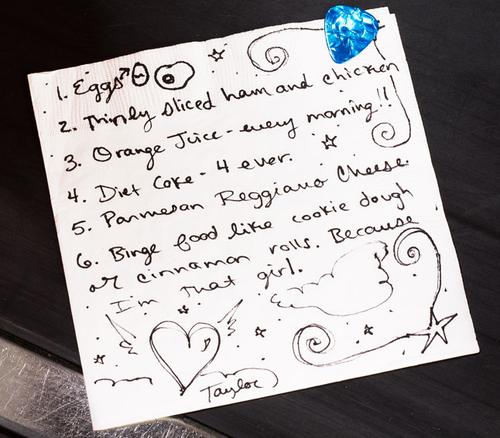 While on tour, Swift reveals she doesn't have the most consistent of diets. A typical show day will start with a huge breakfast of eggs, sausage, biscuits and "anything else I can get my hands on." Her big breakfast keeps her going until about midnight, which is usually when she gets to sit down for dinner.

"It's not good to eat late! But on tour there's dancing, and tight dressings, and I get shot out of a catapult-like lift," Swift said. "You make up your own rules."

To learn more about Swift's eating habits and her culinary skills, see the rest of her interview here.