I'll admit it. I'm a nerd. In all aspects of my life, nerd-dom reigns supreme. Naturally, it is a guiding principle in my feeling and sentiment when it comes to wine. Which was why I was really looking forward to a presentation of the wines from Lebanon's Chateau Musar. For this recent event in Seattle, my journey was led by Serge Hochar; his father, Gaston Hochar, first planted vineyards in Lebanon in 1930. 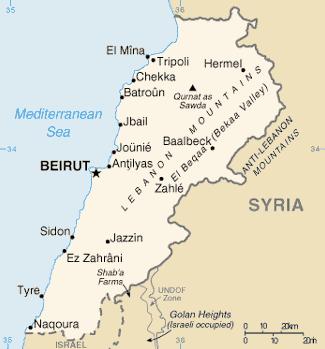 Maybe you're not familiar with Lebanese wine? Didn't even know there was wine being produced in Lebanon? Well they've been making wine in Lebanon for 6,000 years. If you recall the passage in the Bible about turning water into wine, that's Lebanon, too. The wine-producing region of the country is in the Bekaa Valley, protected by two mountain ranges, the Lebanon and the Anti-Lebanon. And the Chateau Musar winery is located not far from Beirut. Remarkably, as Elizabeth Gilbert notes in her excellent profile of Serge and Musar, "A Wine Worth Fighting For," the winery continued to operate "defiantly, exuberantly" during the Civil War that raged in Lebanon from 1975-1990.

So it was with great anticipation that we began to taste a selection Serge's wines, as bottles from Chateau Musar have an astonishing ability to age. The lineup of wines featured a quartet each of red and white: 2002, 2000, 1994, 1975, and 2005, 2003, 1991, 1980, respectively. The red is a blend of Carignan, Cinsault, and Cabernet Sauvignon; the white, a blend of two indigenous Lebanese grapes, Obaideh and Merwah.

These wines have a remarkable quality that defies logic. As Serge explained, the wine has "the ability to grow younger as it grows older." I'd have a hard time picking out the 1975 as the oldest if the four red wines were served to me blind. Certainly these are wines for the cellar; Serge recommends giving them at least 15 years, and the proof is in the glass that they can last for decades longer. "They are wines to age with you," as Serge reasons. "You are changing, the wines are changing." (Here I would like to say that I wish I was growing younger as I'm growing older.) 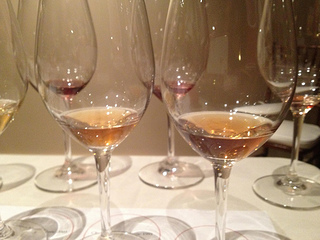 Serge's, philosophical, romantic, and humorous charm made it clear from the beginning that this was no clinic or seminar. (Example of his humor: When asked when a certain vintage should be consumed, Serge quipped, "You should drink it two days before you pass away.") He didn't travel all this way to talk about how many months in barrel, yeasts, punch-downs, blah blah blah. Serge is the anti-PDF. He made it clear: "I am using wine to talk to you about the world of senses."

I'll admit it has been a long time since I thought about wine so intellectually, beyond the obvious pleasure it provides and pleasurable moments it enhances. So what is the most important thing about a wine? What makes a wine memorable? Serge:

"The way it lingers. A wine that has the ability to stay, to become infinite."

Similarly,  Serge believes the most important wines "transform the taste into memory." 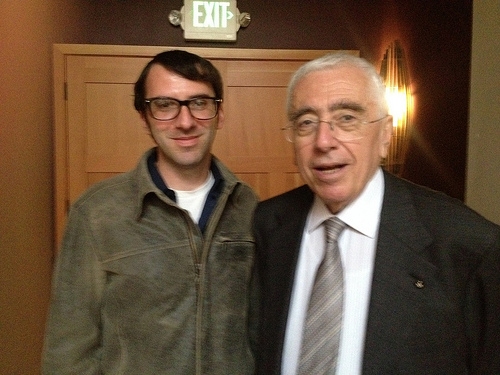 After the seminar, I was invited to sit down with Serge and a few other folks from the winery, distributor, and importer for a quick lunch. I was excited to pepper Serge with a myriad of questions and madly scribble voluminous notes. A combination of location confusion, the hectic nature of a surrounding event, and the lack of brilliant, stimulating questions on my part left me a little frazzled. Even the photo I got with Serge did not properly capture his personality. (Or my enthusiasm and admiration.)

But then I thought, "So what?" Rather than worry about questions, photos, quotes, notes, and blogs, I decided to just enjoy the moment. I soaked in more of Serge's wit and wisdom while quietly contemplating his wines, both red and white. And why would I want to be the director of this conversation and interaction? By relaxing and listening to Serge, I was absorbing memories that I would be able to taste for the rest of my life in each glass of Chateau Musar.

The Coffee Ring is a Mocha You Can Wear
Marissa Brassfield

9 Celebrities Who Dieted for a Movie...
Rosemina Nazarali

Stand Mixer T-Shirt is for Betties Who...
Marissa Brassfield

The Battle to Save Raw Milk is ON!
Shoshanna Levy