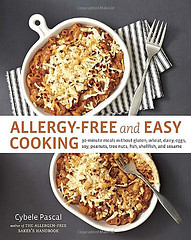 Cybele Pascal is the Allergy-Friendly Cook. She's a cookbook author, mom, food allergic person, Ambassador Who Cares for Food Allergy & Anaphylaxis Network, baker of allergy-friendly cookies, and is working to make the world a safer and more delicious place for eaters everywhere, one recipe at a time. Watch the video below as she talks with Foodista.com co-founder Barnaby Dorfman about her newest book Allergy-Free and Easy Cooking and how to live without the top 8 allergens (dairy, eggs, wheat, soy, peanuts, tree nuts, fish and shellfish). Also, find the recipe below for Allergy Free Buffalo Wings with Ranch Dressing for Super Bowl Sunday from her book!

See Part 2 of this interview.

Hi folks, Barnaby Dorfman here with Foodista.com and I’m really excited to be interviewing Cybele Pascal, the author of a series of allergy-free cookbooks.  We were connected recently.  We actually went to high school many years ago, together.  And today she has a new cookbook that we’re going to be talking about, which I have right here, Allergy-Free Cooking … it’s actually Allergy-Free and Easy Cooking, which is one of her latest editions.  And so welcome Cybele.

Hi.  Thank you for having me on this Google video chat.

Wonderful, thank you, you know, I was thinking maybe as a start you could just tell us how you got into the whole allergy-free cooking space and category, if you will.

Absolutely.  It’s been a very serendipitous process for me.  I actually began cooking at the high school that you and I went to together.  My job was to cook the nightly vegetarian meal for the 50 vegetarians at our school.  So that’s how I really got interested in cooking in the first place.  But never planned to have it be my career and then my son Lennon who is now 11 was diagnosed with multiple severe food allergies when he was four months old.  So it really completely changed the way I looked at preparing food.  I had to eliminate the top eight allergens from everything that at that time I was eating, I was breastfeeding him so I had to be put on what’s called a maternal avoidance diet which means that I couldn’t eat anything that might pass through to him.  And so then I was on that for many, many months.  And then once he started eating solid foods he was also on an avoidance diet.  So he couldn’t eat any of the top eight food allergens.  So we started writing recipes down for us because there weren’t any top eight food recipes out there that I could find, there were no cookbooks for people like us.  And as I started writing recipes, [0:01:43.6], my, you know, history as a cook, which I had done for many years, you know, for in the summers or after college, really served me well because I was able to start creating recipes for us.  And then as I accumulated enough recipes, I realized I should write a cookbook for the other people out there like us and then sort of that’s where it all, you know, began and for now, and I was an allergy friendly cooking expert by default.

Great.  And so you’ve written several cookbooks, how many, what was the first one?

Wow!  Great.  And maybe, tell us a little bit about why … I mean, so this is about allergy-free easy cooking.  Why the focus on ‘easy’?

Interestingly enough, okay so my first book I wrote came out in 2005 and it took me a few years to write it.And I just did the recipes that I liked but I made them allergy friendly. You know, I would do things like slow braised lamb stew or short ribs. Foods that I really loved to eat and were, you know, from my foodie experienced, a lot of kid friendly foods, but many “foodie” types of recipes.  And those recipes were really great, but one of the things I realized after that cookbook came out is that a lot of people who have to cook allergy-free don’t necessarily want to cook, don’t have any experience with cooking and are forced to do so by necessity.  So they really want to be as simple as possible.  They don’t want to spend four hours marinating something.  They want to just do it quickly.  So I really wanted to meet that demand for those out there who are forced to cook but don’t want to, and to make it more pleasurable and easier for them.  So I was like, you know what, I’m going to write a book full of 30-minute meals for people like, you know, and I quite frankly at this point in my life, when I was writing my first cookbook I only had one kid and I wasn’t working full-time and I had the time.  Now, I have a full-time job, I have two kids and I’m running around.  So I don’t want to spend more on a regular weeknight than 30 minutes putting something together, so that’s why I did it. More of a challenge quite frankly.

It makes sense, yeah, I can relate, you know, I mean I love to cook but some cookbooks, you know, like The French Laundry cookbook practically every recipe starts out “on day one” and you know you’re in for a long process.  You know, one of the questions I have was, do you think that there are health benefits for people who don’t have food allergies eating with this diet?  And then also maybe if you could define kind of what is allergy-free cooking, like what are the specific things that you avoid?

Sure.  Well, to start out, there are eight foods that account for 90% of food allergies.  So those eight foods are dairy, eggs, wheat, soy, peanuts, tree nuts, fish and shellfish, that’s 90% of food allergy sufferers are reacting to those foods.  And in Canada there’s actually a ninth one which is sesame, so that’s included in their top list.  And I think that probably will be added in the United States as well.  So those are the foods.  And I do think that there are benefits to eating a top eight allergen-free diet.  I consider it’s for clean eating because by default you’re really not adding any processed foods, because you know, you go to the store and you look at a processed food, you look at a can of something, right, generally there’s going to be a derivative of soy or of wheat, you know, that it’s been processed, it’s not even in its original form.  So I think it’s by default, by eating an allergy-free diet you’re also eating a whole foods diet, because you’re not eating any of these processed foods.  And I think that that improves your health.  I think the other thing that I’ve discovered about eating this way and I’ve been eating this way now for 10 years, is let it be said that I also have food allergies, just to put it out there, not just my kids.  But I find that it’s instead of limiting my world, it’s actually expanded my world.  So yes, you can’t eat any of these top eight foods, but that forces you to think in new ways about other types of food, so in fact it’s completely expanded my horizon.

So I’m thinking about things like ancient grains, right.  I didn’t ever think about cooking with ancient … like ancient gluten-free grains like quinoa and amaranth and sorghum and millet, I wasn’t using those before I was forced to eliminate wheat from our diet.  And they’re incredibly nutritious.  So right there, you’ve got, you know, fiber and all these nutrients, these vitamins.  That’s a really, really great and unexpected benefit I think.

Gotcha.  Yeah, no, I’ve heard that from so many people who for one reason or another have eliminated elements of kind of what you would call a “normal diet” from their diet and it does open your horizons.  I was reading through your book, one of the items I’d never heard of was coconut amino acids.

You’re so smart to focus on that.  It’s interesting, I just did an interview about the Chicken Lettuce Cups recipe which uses my homemade hoisin sauce which I make with these coconut amino acids.  And I was so hoping they would ask me about them and they didn’t, so thank you for asking about those.  That ingredient is fantastic, one of the funnest things about this book for me is I’ve done a lot of Asian recipes because it’s very hard to find Asian food that’s either wheat-free and soy-free and often has, you know, Asian food also has fish sauce in it and nuts and so I really wanted to focus on that.  So I created all these Asian sauces and the backbone of those sauces, many of them, is this coconut amino acids which are … they’re a raw food and they are … it’s fermented coconut sap and it really has this incredible like a tangy, salty, sweet thing the “umami” of soy sauce.  I wouldn’t just throw it on, you know, fried rice on its own and expect it to do the job.  But when you mix it with other ingredients it really can approximate those flavors that you would expect in say a hoisin sauce or a teriyaki sauce.  So that’s been one of my favorites.  One thing about that ingredient though is if you go buy it, because it’s fermented and it’s traveled generally from the Philippines, when you open it, it may explode, so it’s very, very fizzy with the fermentation. So I’ve had a couple of experiences where I’ve opened it, it’s gone “shfooo!” so make sure it’s stabilized. 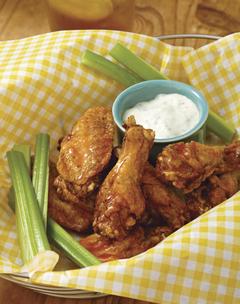 Watch Part 2 of this interview here!

A Rose For Your Bros: Tasty Bacon Roses
Sheri Wetherell