Art for Food: A Surrealist Dinner By Maxime Bilet

What happens when food science, cuisine, art and an intellectually creative mind collide? An extraordinary and unforgettable meal that titillates the palate and tantalizes every single sense. That’s precisely what we experienced when we joined six other pleasure-seeking diners at the Surrealist Dinner at the Storefront, a multi-course dinner created by Maxime Bilet, artist, chef, and co-author of the renowned Modernist Cuisine project and cookbook. The evening before us was an exploration of Maxime’s signature modern cuisine, unexpected fashion, visual displays and even blindfolding! 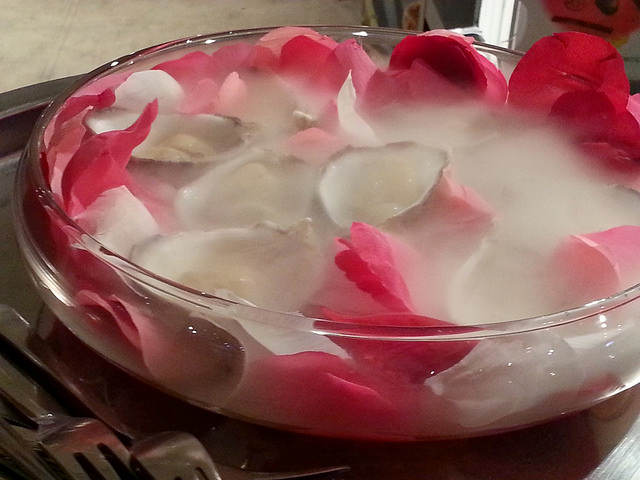 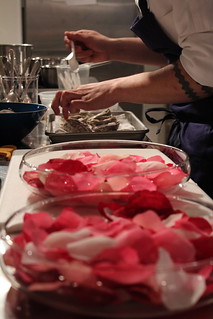 Our journey began with an amuse bouche of carbonated grapes in champagne. Imagine biting into a grape and discovering a surprising fizz that tickles your tongue! We were then served sensuous oysters on the half shell nestled amongst “smoking” rose petals and lightly bathed with some magically flavorful mignonette. Whatever this secret sauce was, it was essential that I had more! 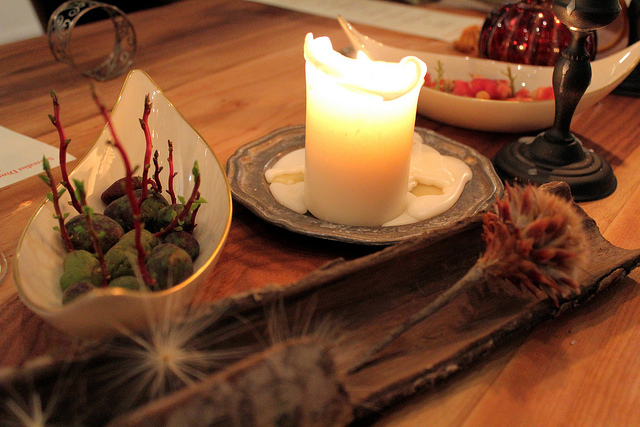 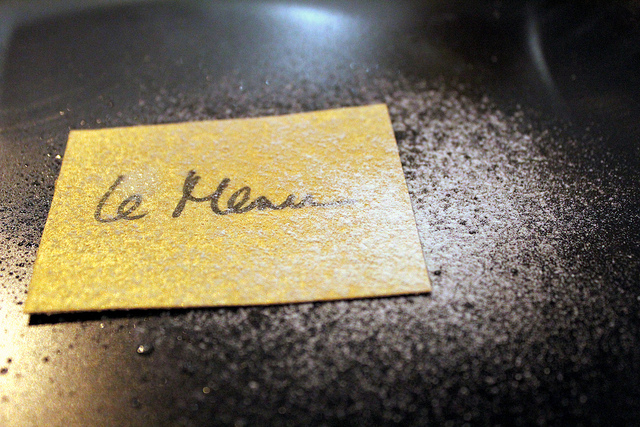 We moved to the table, a beautiful wooden farm table handcrafted by Maxime himself, where we were presented with a small black plate simply adorned with a slip of paper slightly dusted with powder. We were instructed to taste. It was a taste explosion of all five flavors - bitter, salty, sweet, sour and umami - on edible paper. This was the introduction to “le menu” of the evening, a hint at the fascinating, delicious and often humorous ways we would be experiencing our meal. Indeed, food is art! 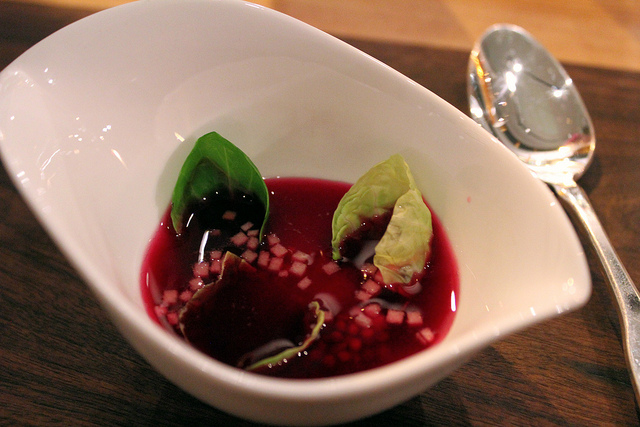 Has your food ever magically changed colors before your eyes? Before each of us lay a bowl containing a few tender Brussels sprouts leaves, a bit of mustard grain cream and what appeared to be a tiny amount of clear liquid. In a pitcher, Maxime swirled a blue liquid. But as he poured this liquid with another liquid, the juices slowly blended together to become red. What an awesome transformation! Papa Smurf would have been impressed. The taste of this chilled beet borscht was truly exquisite! 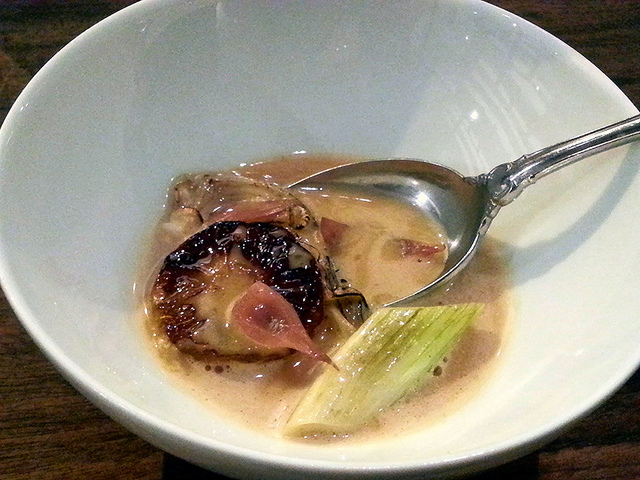 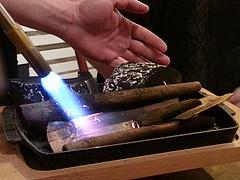 What came next blew my mind. If this dish was not my favorite of the evening (because, frankly, having to choose a favorite of the evening would be tantamount to having to choose a favorite child), it certainly ranked at the top. Sweet onions were pressure cooked with Comté cheese, a strong and slightly sweet cow’s milk cheese, creating a deeply caramelized and uber-flavorful broth. Caramelize your onions in a pressure cooker and you will never do it any other way again. Ever. The creamy jus was then paired with charred alliums and tender enoki mushrooms. I restrained myself from licking the bowl. To enhance the flavor of the soup our senses were treated to an olfactory pleasure. Cassia bark was charred table side, filling the air with a smoky cinnamon aroma that heightened the flavors on our spoons.

Magic Elixir in a Bubble 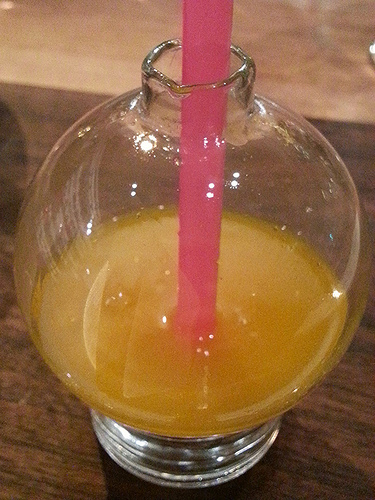 We cleansed our palates with cocktail that one of our fellow diners, a corset designer, referred to appropriately as “an adult Jolly Rancher.” Our bourbon and fresh Cara Cara orange blossom sours were charmingly served in glass bubble vessels with tall fat straws and tasted refreshingly fruity, yet adult. This was one damn good orange juice!

The time came for a little lesson in molecular gastronomy a la Modernist Cuisine-style. Maxime poured half the magnum of Chateauneuf de pape into a Vitamix blender and whirred it to a froth. This hyper-aerates the wine. We then did a side-by-side tasting of the “blender wine” and the non-aerated. The hyper-aerated wine tasted like it had been aged 10-20 years, less astringent, extremely smooth with less dimension and fruit forwardness. The non-aerated wine had more bite and was still on the high side. We all agreed that combining the two created the absolute perfect balance. 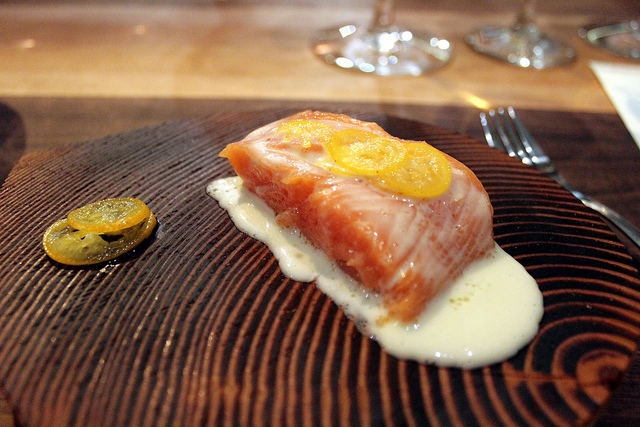 Next up was perhaps a hickory plate adorned with a butter soft sous vide filet of salmon atop of velvety foam cream and citrus. Not on the menu, this dish was the Pacific Rim on a plate! 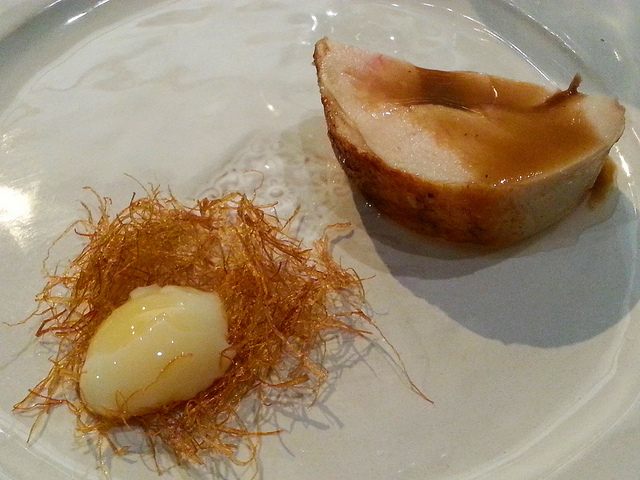 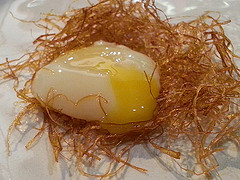 What to eat first, the chicken or the egg? It was a Maxime-presented quandary I’d gladly welcome any day. Tender and juicy chicken breast cooked sous vide and drizzled with its own succulent juices or the sous vide soft boiled quail egg that was delicately placed upon a nest of paper fine fried Japanese green onion. 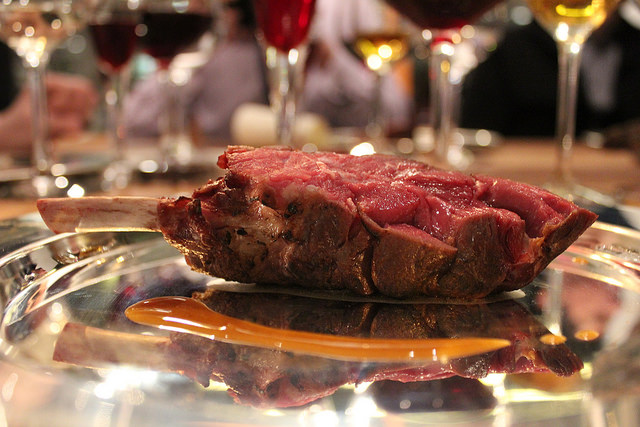 Next up we got a little caveman. Placed before us were giant sous vide venison “lollies” atop a rich and unctuous juniper berry reduction. I like my meat rare and I salivated over this perfectly prepared loin like a hungry dog, lapping up the sauce with my bone in hand. It was at once refined and oh so primitive! 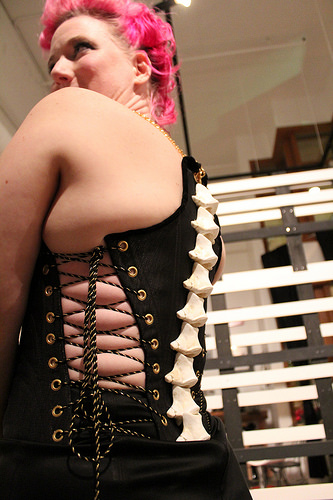 It was time for a taste of the fashion world. My beautiful pin-up doll table mate, Nora, a former Hollywood costume designer-turned custom corset artisan, stood up for a reveal of her Surrealist Dinner-inspired creation to pair with our venison. With a demure look she removed her wrap to reveal the moveable resin spine of a deer (cast from a deer her father hunted) affixed to the back of her corset. As a former student of fashion design, I marveled at the craftsmanship of such a creation. Both freaky and artistically beautiful, you just had to love the juxtaposition of food and fashion! 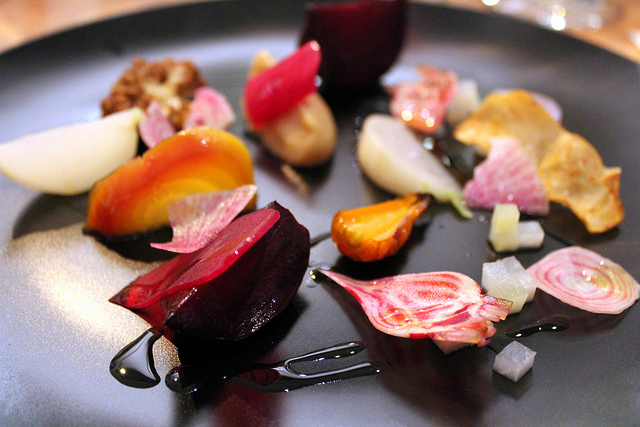 So Fresh and so…
Apple Cider, Crème Fraîche, Dark Caramel

In our home we refer to sweet vegetables and fruits as “Nature’s candy.” The gorgeous array of red and golden beets, parsnips, and roasted cauliflower was truly an artistic representation of Mother Nature’s edibles. Thin shavings of Chioggia beets were artfully arranges like delicate flower petals. These noble roots were served with crème fraîche and a drizzle of dark caramel. 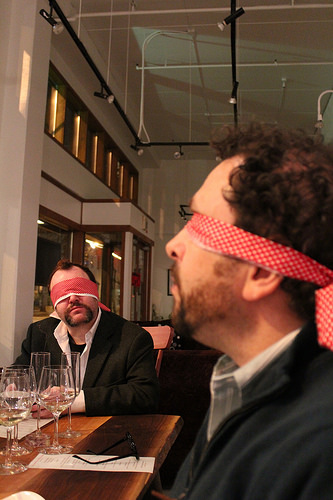 We ended our sensory-filled culinary journey with two sweet delights. After the scrumptious warm PB & J madeleines we were asked to don the blindfolds placed before us. We then each selected a piece of edible mystery from our plates. Another delicious taste explosion! They were chocolate squares filled with a blast from the past: pop rocks!

This multi-course meal was truly one of the most memorable meals I've had. If you're inspired by these dishes, a copy of Modernist Cuisine at Home should be added to your must-haves! Be sure to check out some of the upcoming events at Maxime’s Art for Food space below. If you don’t live in the Seattle area, an evening with Maxime and his team is worth the trip! Life is short, we should eat well.

The Flavor Intensive Series this month features a selection of dishes that have received the highest raves from our pop-up dinner series. In "Creating the Pièce de Résistance," Maxime Bilet--coauthor of Modernist Cuisine--and Andy Nhan will teach you the secrets to creating intense flavor using modern techniques for the home kitchen. Participants will enjoy a full meal that they will have a hand in helping create, while Maxime and Andy demonstrate methods new to most students.

Join chef, artist, and Modernist Cuisine co-author Maxime Bilet as he and the Art for Food Culinary Team bring you on a journey through their interpretations of iconic dishes from the world's best chefs.This special dinner will feature the nouvelle cuisine of Paul Bocuse, the haute cuisine of Joel Robuchon, unconventional flavors from Heston Blumenthal's Fat Duck kitchen, the avant garde cuisine from Ferran Adria, the Nordic vision of Rene Redzepi from Noma, and more. The meal served will be an homage to all of these masters who have shaped food culture as we know it.

In celebration of 1001 Western Ave becoming the permanent home of Art for Food, we are throwing a sumptuous tea party with the help of our friends: Chefs Maria Hines (Tilth, Golden Beetle, Adrodolce), Jason Franey (Canlis), and Garrett Melkonian (Mamnoon); Nic Virrey and Brandon Paul Weaver from Matte and Gloss, as well as several performers and artists.

The fête will include five different interactive spaces featuring the history, ceremony, and our modern interpretation of:

The heart of the Art for Food project is to promote the interdisciplinary collaboration of chefs, producers, artists, educators and scientists through the universal language of food.

To that end, we have teamed together with an incredible group to provide you with a series of tastes, experiences and libations!

Join us for an evening of fun and indulgence!

The Art for Food Team

Merci beaucoup, Maxime and Team, for a wonderful evening! 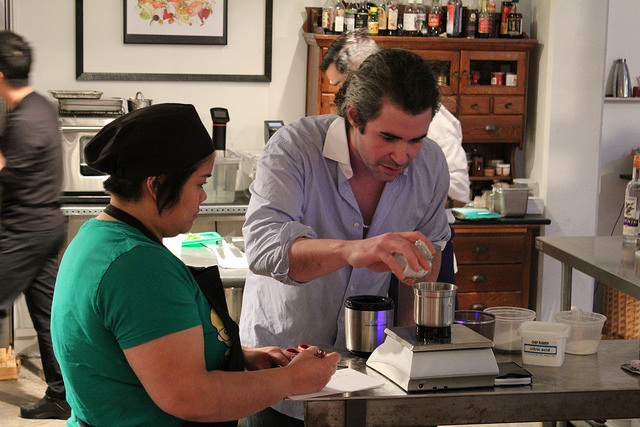 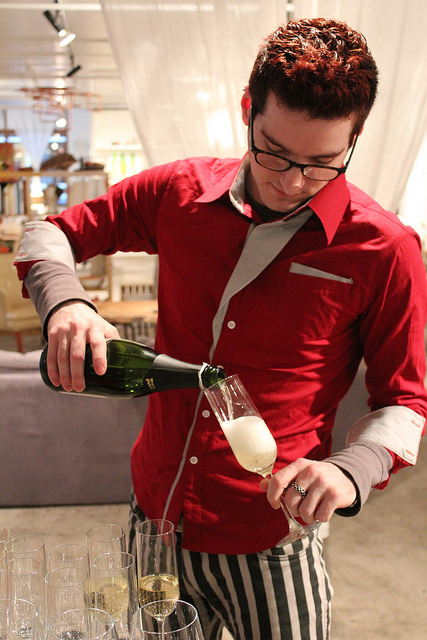 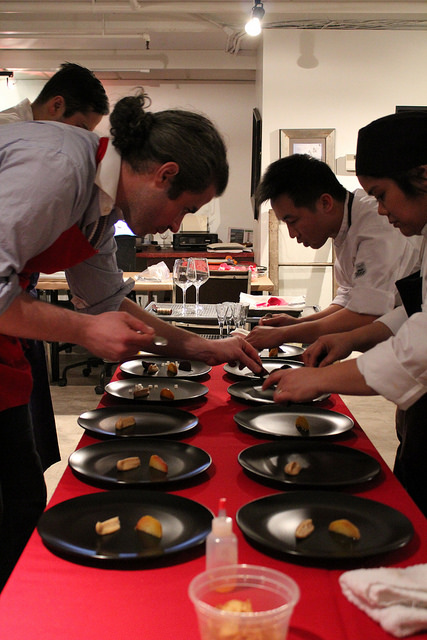 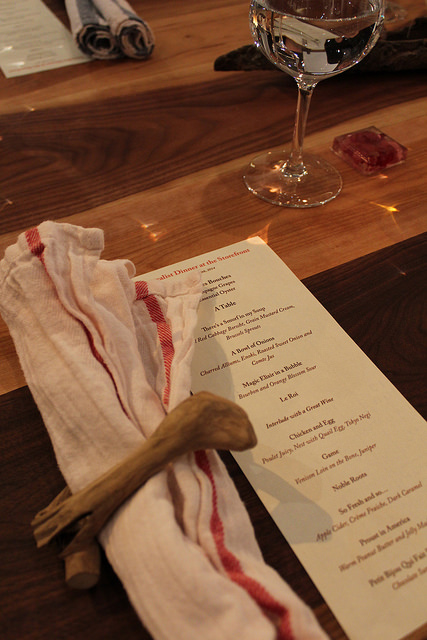