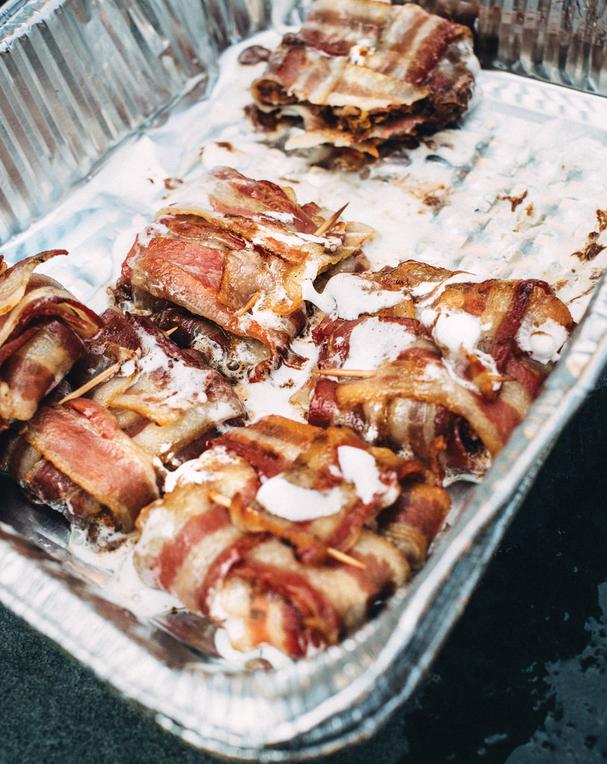 You may recoil slightly when you think of the bacon s’mores mash-up. But then it settles in and you think oh yeah, camping. I’d totally eat those! That nice smoky flavor paired with the sweetness of chocolate and gooey marshmallow? I think Elvis would have been on board for sure.

This Bacon S’Mores recipe comes from EAT STREET: The ManBQue Guide to Making Street Food at Home (available May 2016). ManBQue is a men’s grilling and lifestyle organization that began as a Chicagoan rock and roll community, but soon grew into a global network of music lovers, craft beer aficionados, adventure seekers and DIY grillers. The cookbook is filled with 200 grilled, fired and charred recipes for the tastiest street foods in the world.  In addition to these Bacon S’Mores you’ll find more porkalicious recipes featuring the gateway meat, like Bacon Lime Fried Rice, Bacon Snicker Snack Bars, and the Oh Wait, This One is My (Bacon) Jam. If you like it spicy, try their Nashville Hot Chicken recipe here. Tonight we’re cooking up some of their Moroccan Lamb Mini Burgers with Harissa Yogurt and Fresh Mint. It’s a clever cookbook that’s both hilarious and totally doable. Plus, each recipe is paired with a beer. Nice.

"This one takes a little practice but you figure it out quickly. It is messy, salty, and terrible for you—in short, all the best things in life." ~ EAT STREET

Step 1. To make each s’more, line a ceramic plate with two sheets of paper towel, then lay out four pieces of bacon in the shape of a plus sign, as follows:

•    One laid down on the paper towel, vertically
•    One laid horizontally across the middle
•    Repeat, laying one horizontal slice next to the first piece, then one vertical against the other piece
•    If you did this right, you’ll have a 3 x 3 woven bacon grid

Step 2. Lay three sheets of paper towel on the top, and weigh down with a second plate.

Step 3. Microwave the bacon for 2 minutes to par-cook it. Don’t cook it fully, or your marshmallows won’t melt. Don’t under cook, or it will become a greasy mess. Luckily, it’s easy to hit that middle ground.

Step 4. Carefully remove the bacon, pat dry, and let cool while you repeat the above steps. You’ll get a lot faster as you go.

Step 5. Assemble the s’mores—place a graham cracker square in the middle, then 2 pieces of marshmallow. Add 2 squares of chocolate, then the last graham cracker. Gently smoosh (why no, we didn’t go to culinary school) the s’more together without breaking the graham cracker. Fold up the sides of the bacon from the bottom over the sides and tip and secure with a tooth pick. Again, you’ll get faster as
you go.

Step 6. Find a kick-ass live fire, or just get a grill going. Using a grilling basket, tongs, or even a grill fork, cook the s’more for two minutes per flat side and 20 seconds per seam side—until the bacon is juuuust crisp around the sides.

Step 7. Sing camp songs. Anything by Hall and Oates should do.