I'm a sucker for Vietnamese and Thai salads, especially those that combine sour, salty, sweet and spicy flavors. The recent issue of EatingWell magazine (March/April 2018) featured flavor-packed Burmese salads, a cuisine I'd never tasted before, but what caught my eye among the list of staple Burmese ingredients (lime juice, fish sauce, garlic, ginger, fried shallots, dried shrimp) was toasted chickpea flour. I often cook with chickpea flour (check out this fantastic socca pizza recipe), but I've never toasted it and sprinkled it in and atop a salad. So I thought I'd give it a try. It lent a wonderfully nutty flavor to the dish and a heartiness to the dressing. A brilliant addition indeed!

Below is an adaptation to the recipe featured in EatingWell. I used a combination of romaine lettuce and napa cabbage instead of all cabbage, I added a bit of sweetness to the dressing as it was a bit too tangy without it, and I included the oil in which I toasted the shallots as it was too good not to do so. This boldly flavored salad is super easy to make, it's sure to become your new favorite Asian salad recipe as it is mine! 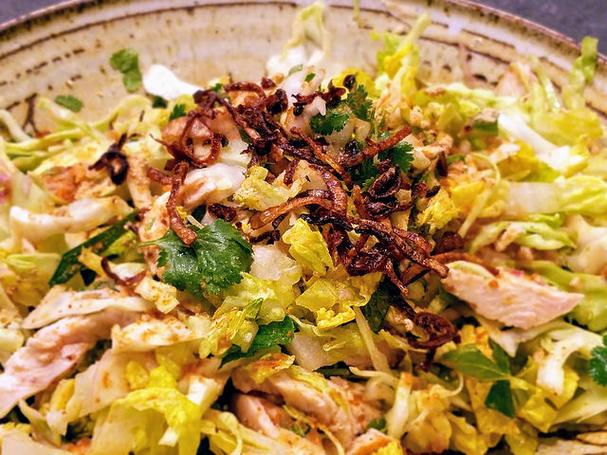 Note: if you'd like to add some spice to your salad, toss in some red pepper flakes to the dressing.

Place chicken in a large saucepan and cover with water. Bring to a boil, then reduce heat and simmer, covered, for about 8 minutes. Remove chicken from water, set aside and let rest for 5 minutes, then shred with clean fingers.

Meanwhile, combine fresh shallots, lime juice, and mirin (or honey) in a bowl (add red pepper flakes if you'd like some spice to your dressing). Let sit while you make the fried shallots and shallot oil.

Pour the canola oil in a small skillet or saucepan over medium-high heat. Add the sliced shallots and cook, frequently stirring, until the shallots are a nicely browned but not burned, about 3-5 minutes. Remove the shallots to a clean paper towel to drain, then pour the remaining shallot oil into a small bowl. Add the fresh shallots, lime juice and mirin from above, along with the fish sauce; whisk until combined.

For the toasted chickpea flour:
Add chickpea flour to a small dry skillet. Cook over medium heat, frequently stirring, until it turns to a nice golden brown, about 3-4 minutes.

Place the shredded cabbage, romaine lettuce, cilantro, and 1 tablespoon of the toasted chickpea flour in a large bowl and toss with the dressing until well combined.

Divide salad among four plates and garnish with the fried shallots and a dusting of the remaining toasted chickpea flour.