Eating and Drinking Your Way Through Southern Oregon: Part 1

If you say “Oregon wine district,” most people will think of the Willamette Valley – which does indeed produce some mighty fine wine. This trip, we traveled to southern Oregon to explore another essential wine district in the state. We visited several towns, each with its own picturesque character. 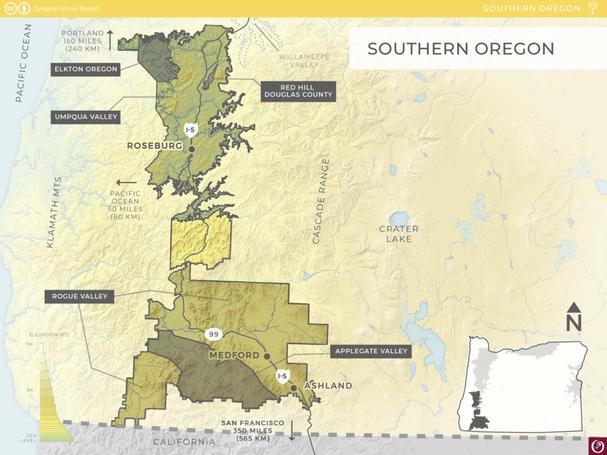 The Southern Oregon AVA (American Viticultural Area) covers a vast range of land beginning about 160 miles south of Portland and continuing almost to the California border. Because of the distinct geographical regions and many different soil types found within the AVA, it has been divided into five sub-regions, each with very different growing environments and therefore producing different varietals of grapes. In total, we visited five different towns and found something (or many things) beautiful in each. 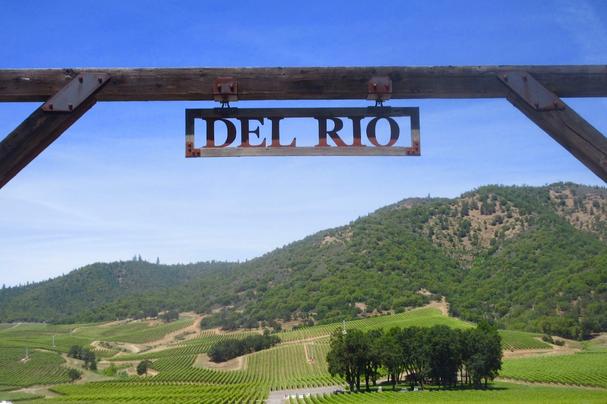 Our first stop on Monday morning was Del Rio Vineyards near the towns of Rock Point and Gold Hill. Like many places in this part of the world, Gold Hill was first settled because someone found a big rock of gold! As hopeful miners flooded in, Rock Point also became important to the area. At one point in its history, it was a bustling little town and stagecoach stop. Outside of town, as we drove up to Del Rio, the sight of rolling hills of vineyards was astounding. The vines seemed to go as far as you could see.

The Rel Rio tasting room is in the old Rock Point Stage Hotel built-in 1864, which has been remodeled but still maintains its rustic charm. Entering the tasting room, you will find a small area as the main tasting area, but off to the side is a more prominent, and more relaxed space that is very welcoming. The winery is owned by a trio of dedicated wine folks: Rob and Jolee Wallace and Lee Traynham. Rob is a fourth-generation farmer, starting way back with wheat and tomatoes, and now just grapes. We sat down with Lindsey Zagar, the Communications and Marketing to find out a bit about the vineyard and do some tasting. Lindsey told us that one of their most popular events takes place in September, before harvest, when guests are invited to take hikes through the vineyards. They are even allowed to sample the grapes as they go!

It was way too hot for a hike the day we were there, so we settled in for some tasting. Since it was a brilliant summer day – it made sense to start with the 2016 Viognier – which has become my favorite back-porch sipping wine. The Del Rio Viognier has a lemony and somewhat toasty nose. The taste is bright and slightly dry with a layered fruit and mineral finish. And it has a beautiful light gold color. Perfect!

Our next taste was the 2014 Merlot. It is a beautiful deep purple color, which really shines when held up to the light. The nose is elegant, with dark berry and tobacco. It has taste notes of leather and chocolate. A truly delicious Merlot.

Next up – the 2014 Claret, which a Merlot-Cab Sauv blend. A quick dip of your nose into the top of the glass reveals an aroma of intense ripe fruit, eucalyptus, cedar, and herb tinges. The taste is round, robust, and structured. Lindsey recommended that this would be great aged in the bottle for 5 or more years.

We finished the reds with the deep red colored 2015 Syrah. It is made in the Northern Rhone style and has a nose of pepper, licorice, and dried fruit. It is very fruit forward – and would make a great sangria!

We finished our sampling with the Rose Jolee (of course, named after Jolee Wallace). The dark pink color clues you into what a fun and refreshing rose this is. Slightly sparkling, with just the right amount of spritz, the first whiff I got was bubblegum! The sweet taste notes of strawberry, grapefruit, and mango are balanced with a crisp acidity. Another great back-porch wine. Head wine-maker Jean- Michel Jussiaume has created some beautiful wines, and we would have loved spending more time there, but we had many places to go and wine to sample.

Tucked away in a small building right on main street Jacksonville, we found the tasting room of Quady North, a winery that is near the top of my list of unique wineries. Their tag line is “The Wines of The State of Jefferson.” For those unfamiliar, there was a near successful attempt to create a new state made up of some southern counties of Oregon and northern counties of California way back in the 1930s. And it was to be called The State of Jefferson. Public opinion in those areas was that rural places should have their own state – without having to deal with the problems of the cities. Even though they had gotten to the final step of success  – it was not to be. When Pearl Harbor was bombed, all attention was on bringing the country together, not creating any more divisions. Which is not to say that the idea hasn’t been floated around in the years following. But enough history – let’s get to the wine.

We started with the Quady North 2017 Eevee Grenache Blanc (89 points, “editor’s Choice” Wine Enthusiast). It has flowery notes and is a beautiful bright color. The taste is fruit-forward with reminders of Honey Crisp apples. This would be a great wine with an assortment of cheeses. The wine is named after the owner, Herb Quady’s 8-year-old daughter – who seems to have an entrepreneurial streak herself. Her handmade jewelry is on sale for those who’d like to take a non-liquid souvenir home.

Our next taste was the Pistoleta, a Rhone White blend of 42% Viognier; 27% Marsanne; and 19% Roussanne and 12% Grenache Blanc. According to the Tasting Room manager Darrius, the taste is “halfway between lip-smacking and unctuous.” Not sure about the unctuous part – I found it very approachable with its stone fruit flavors, especially melons and apricot and a slightly sweet note of honey. It is light and crisp and would go equally well with seafood or spicy food. (89 points, and Editor’s Choice -  Wine Enthusiast)

We then moved on to the barely pink with the 2018 GSM Rose. It is a blend of 56% Grenache, 39% Syrah and 5% Mourvedre, created in a dry, southern French style. It is bright and fruity – but with a tang of citrus, skins to keep it well balanced.

We finished our visit with the Bomba, a Grenache wine that is highly versatile and is very fruit-forward (dark fruit, cherries, currents) and very dry. It is aged for 10 months in neutral oak and would go really well a great stew or pesto pasta dish.

Tap Into the Truth About Your Water
Shoshanna Levy