Part 3: Cochise County, Arizona: Willcox Wine with Notes of the Old West (read Part 1 and Part 2 of this series)

If you are exploring southern Arizona, one place not to be missed is the Chiricahua National Monument. The other-worldly views of the thousands of pinnacles made of rhyolite rock are stunning. You can take an 8-mile scenic drive through the Monument, or you can get closer to nature by hiking one of the many miles of day-hiking trails. We took the Natural Bridge Trail, which is just under 5 miles round trip, with a 700-foot elevation gain. The hike takes you through oak and juniper woodlands that open to incredible views of the impossible pinnacles and ends at an overlook of the small bridge, carved out by water, across the canyon. The pinnacles line the mountainsides like sentinels keeping watch. Many of them looked more like boulders piled on top of each other, some very precariously balanced in a somewhat frightening way! The trail starts at 5520 feet, so it is usually snow-free, even in the winter. Other trails in the Monument may have snow, as they are higher.

During September through May, you can catch a shuttle at the Visitor’s Center to Echo Canyon or Massai Point Trail, two of the more strenuous hikes in the Monument. For the truly adventurous - take the Big Loop – which is 9.5 miles, up and down across the canyons with amazing views.

Since the Monument is in an area known as a “sky islands,” there is an extraordinary number of animal, plant, and insect species located in the park. There are 71 species of mammals and 171 species of birds, not to mention amphibians and insects. Some of these animals are rarely seen elsewhere in the state or the country.

Once you’ve worked up a thirst, it is a short 40-minute drive to Willcox, home of one of only two AVAs (American Viticultural Area) in Arizona.  However, there are three distinct regions.  Although people have been growing wine grapes in Arizona since at least the early 1700s, the current wine scene is relatively recent and fast-growing. In 2005 there were 9 wineries statewide. Today there are over 103. The Wilcox area produces 74 % of the wine grapes grown in the state and is home to more than a dozen wineries. While the wide daily temperature swings (July often has a high of 96 and a low of 65) are ideal for growing grapes, the weather also produces a few challenges. Both early frost and hailstones during the monsoon season can be extremely detrimental to the crops. The area usually sees 13 – 20 inches of rainfall per year. 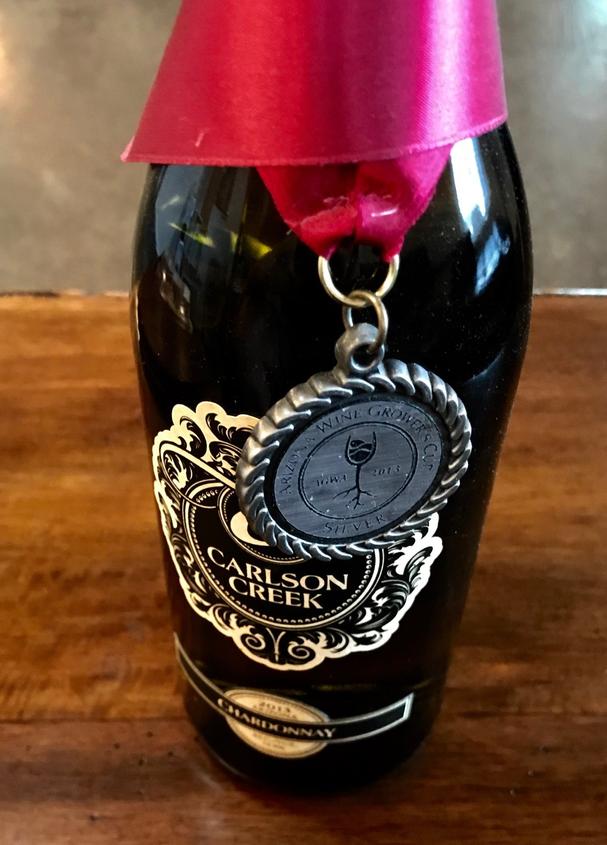 We headed into Wilcox for some tasting and discovered a cluster of tasting rooms in the historic center of town. Our first stop was Carlson Creek Vineyard. Co-owner and winemaker Robert Carlson III started in engineering with dreams of becoming an astronaut. But it wasn’t to be, and he went from there to art, to politics, to pre-law. It was in 2008 while working as a stockbroker that he realized his real calling was farming. Wine grapes to be specific. The Carlson family roots go several generations back in farming, and both his father and grandfather harbored hopes of someday returning. So Robert got the entire family on board and they planted their first vines in 2009.

We started with the 2014 Sangiovese, a medium-bodied red, with notes of plum, blackberry, and earthy clay. We are not the only people who love this wine. It was awarded the Gold Medal in the 2019 World Wine Championship with 95 points!

We also tried the 2014 Rule of Three, their flagship wine and the only blend they make, which is made with 40% Grenache, 30% Syrah, and 30% Mourvèdre. It has aromas of rose, with a small kick of black pepper. With well-layered taste notes of pomegranate, red currant, smoke, and vanilla, this is also award-winning as far as we were concerned.

Our third Carlson wine was the 2017 Malbec, a full-bodied and bold red, with a nose of red fruits along with a slight tang of citrus and taste notes of black fruit and red plum on the finish. It is a very fruit-forward wine with wonderfully balanced tannins and acidity. 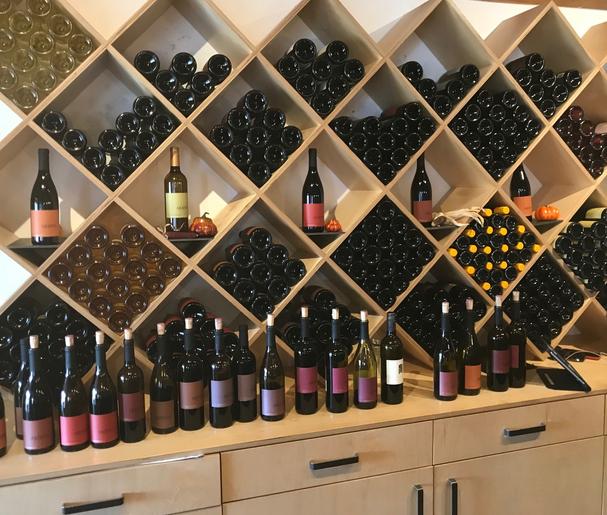 We then stepped next door to the Aridus Wine Company. With a winery and tasting room in Wilcox, and another tasting room in Scottsdale, Aridus opened their cellar doors in 2012. Winemaker Lisa Strid, a transplant from Eastern Washington wine country, joined the family endeavor in 2016, just as the winery was scaling up production. Our first tasting was the Malvasia Bianca, which has won multiple awards from the 2018 Finger Lakes International, 2018 San Francisco Chronicle, and the 2018 Pacific Rim International wine competitions. The nose on this wine was anything but subtle. Floral orange blossom with some exotic spices wafted out of the glass. The taste was refreshing and crisp - juicy pear and citrus with a coriander spice note.

We then tried the 2016 Tempranillo, a forthright, full-bodied red. With a nose of raisin and dried fruit, the flavors of red fruit, cocoa and hints of cedar, and high tannins and acidity, this wine will have a good rack life of 5 – 7 years and promises to get better with time.

Always happy to try another Malbec, we really enjoyed the 2017 vintage. Fruit forward and tasty! Flavors of black fruit highlighted by spice notes of bay, it was delicious.

We ended our visit with another one of their award winners – the 2016 Montepulciano, which was the winner of the 2018 Pacific Rim International Competition. And it is no wonder! This medium-bodied red is oak-aged with well-balanced tannins and acidity. The dark fruit flavors were punctuated with notes of cocoa, balsamic, and licorice. This another wine that will age very well.

Our last stop in the Railroad Ave tasting room district was Keeling Schaefer Vineyards.  Rod Keeling and Jan Schaefer are teamed up as husband and wife, and as self-taught winemakers. They purchased their land in 2000, drilled their well in 2002, and planted their first vines in 2004. Up until 2007, they were still working in Tempe – so “commuted” to the vineyard for weekends of work, then back to the offices early Monday mornings. They finally retired from their city jobs in 2007 and moved to the farm full time. That must have been a relief!

Our favorite was the 2012 Three Sisters Syrah, a full-bodied red with a deep dark color and a nose of plum, espresso, and cigar box. The tastes of black fruit – plum, black cherry, and black raspberry linger on to a long, lush finish. 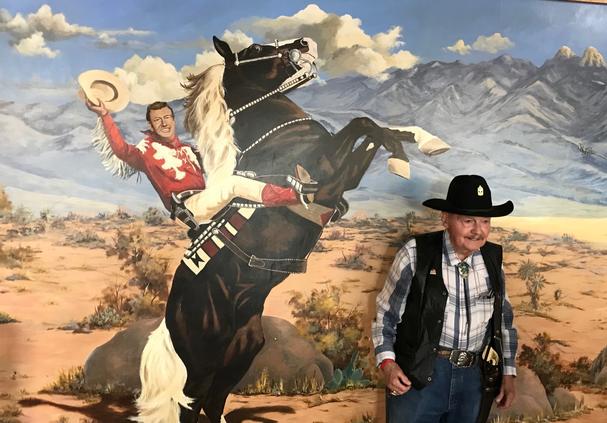 We went out for some fresh air and noticed right next door is a mural of Wilcox’s most famous son, Rex Allen – the singing cowboy, movie star and heart-throb of the ’50s. Born about 40 miles from Wilcox, Rex started his career in show business on the radio, far away in New Jersey, where he was known as “Cactus Rex.” He went on to become one of the most famous of the singing cowboy movie stars, making nineteen westerns between 1950 and 1954. He co-starred in every movie, sharing top billing, was his trusty horse KoKo. And – yes – he and Roy Rogers had a friendly on-going argument about who was the better horse – KoKo or Trigger! We learned all of that and more at the Rex Allen Museum, also in the historic district of Wilcox.

The museum, which opened in 1989, is a treasure trove of relics, awards, saddles, jewel be-decked cowboy outfits, and movie posters from Rex’s long career.

Rex died in 1999, but not before he made many visits to the museum, much to the delight of our guide, Pierre Brehm, Rex’s longtime friend. Just across the street from the museum is a statue of Rex, which also serves as a grave marker for the bodies of both Rex and KoKo.

Wilcox has hosted the Rex Allen Days for the last 69 years. The celebrations include a rodeo, fair, parade, gun show, and car show. Plus, of course, the Wild Bunch Film Festival. The festival next year will also mark what would have been Rex’s 100th birthday.

By this time, we were hungry, so we headed into the business part of town to find La Unica Tortilleria & Taqueria, rated the #1 restaurant in Wilcox by TripAdvisor. Our dinner there was a wonderful experience. The interior of the restaurant, with its adobe walls and heavy dark wood furniture, made me feel like I had walked into a hacienda. The meal started with a basket of house-made tortilla chips and salsa. The chips were light and crispy – best I’ve had in a long time! Michael ordered a hard shell taco and tamale. I reminded him that almost 40 years ago, my Mexican-American friend made us tamales for our wedding dinner! He’s been waiting for a delicious tamale since then. And this one did not disappoint. I also enjoyed my chicken fajita – with the sizzling chicken wrapped in a flour tortilla and garnished with delicious guacamole. 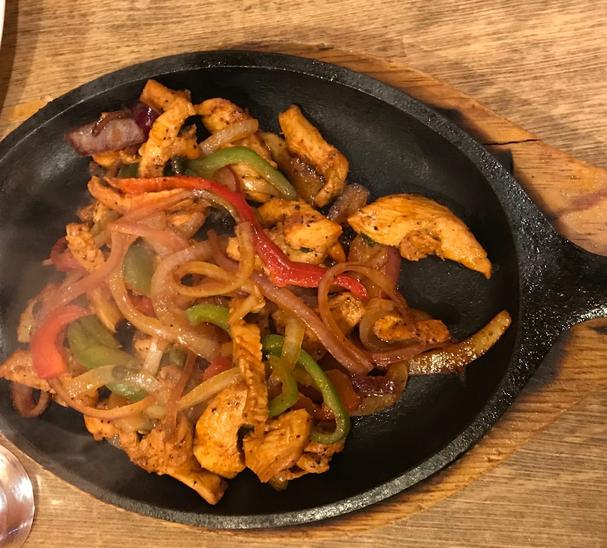 It sure was a full day! Hard to believe that the tiny town of Wilcox has so much to offer, and we only saw, drank, and ate a small sample! They will be getting a return visit from us!