Waterfalls, alpine lakes, mountain flowers, and sunshine is what you can expect when traveling to Yakima from Western Washington or Western Oregon. Here are some of the scenes found going through White Pass. 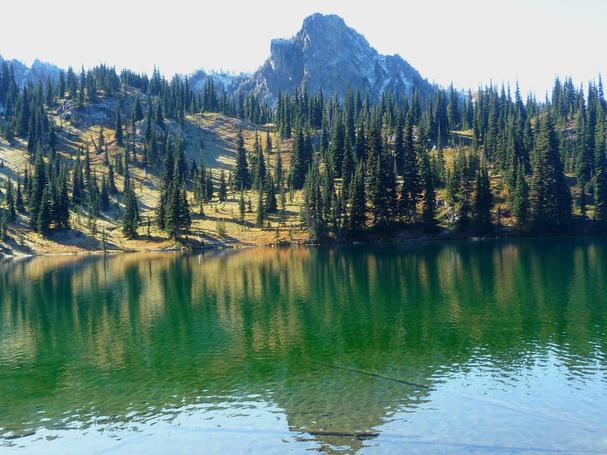 During the summer and much of the fall, we strongly encourage you to go through Mt. Rainier (Hwy 410 to Hwy 123 to Hwy 12), especially if traveling from the Seattle area. If time permits, stop for a hike through the beautiful Crystal Lakes.

Our goal was kayaking (or SUP) on scenic Clear Lake, a little over three hours drive from Seattle, ten miles east of White Pass. Best of all, there is easy access to the boat launch adjacent to the Clear Lake South Campground.

We had a tremendous work-out paddling into the brisk westerly winds and went close to a mile to the tiny, forested Strawberry Island. We continued past the island along the shore near the campground and watched many folks fishing. We later found out that the lake was recently stocked with 13,860 trout. On the eastern part of the lake, there is a small dam on the north fork of the Tieton River. We enjoyed our two hours of paddling with views of snowcapped mountains to the south. That is the general direction of the Goat Rocks Wilderness.

We then took a brief ten-minute drive to Rimrock Lake to launch at Horseshoe Cove.  I was surprised that many local folks were unaware of this great access point that the Forest Service manages. This alpine lake also has stunning mountain views stretching a little over 6 miles. The lake is dammed on the east side by the Clear Lake Dam and on the east side by the Tieton Dam. Both of these dams impound the Tieton River. You can also launch at a more remote spot on the lake Peninsula Campground West.

Back to our car, we drove east on Hwy 12, which follows the Tieton River through the mountains to Naches. However, if one wanted to take a wild 14-mile guided rafting trip down this river in September, that would be very interesting and refreshing.  Every September, the water is released from the dammed Rimrock Lake and flows down the Tieton River. Class three rapids all the way!!

Instead, we took the gentle drive to Naches, which is considered part of the Upper Yakima Valley and is northeast of Yakima. For a reference point,  part 2 of our story is focused on Yakima and Union Gap. We did not cover the Lower Yakima Valley which is the southeast part of the county close the Sunnyside and Mabton. 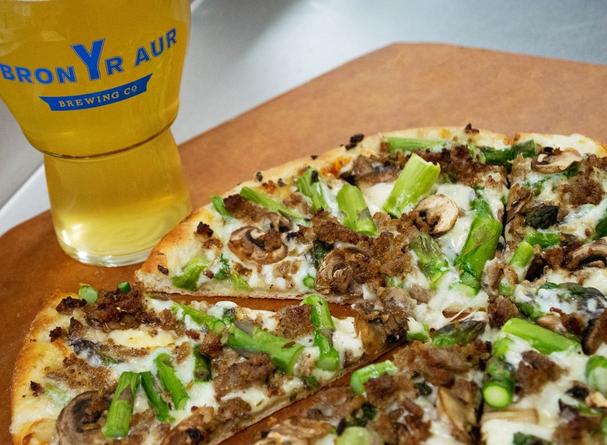 Ready for pizza and beer? Then you must stop at Bron Yr Aur Brewing Co.  Owners Mike and Annette Hadden took early retirement and poured all their funds, along with the help of their children, to start the brewery. Before starting this business, Mike had 13 years of homebrewing under his belt. 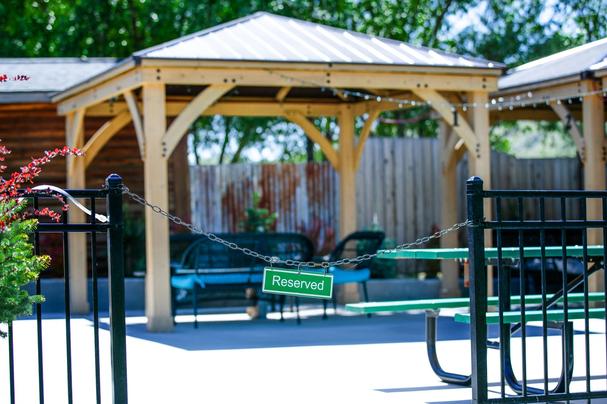 There are two large inside seating areas, plus the beautiful outdoors with mountain views. Perhaps sit under the gazebo or grab a picnic table on the large lawn?

I enjoyed the refreshing seasonal summer beer, American Pilsner, and Elizabeth enjoyed the Rattlesnake IPA with citrus notes and just enough hops to give it some good body. Then we had the highlight of the day - their pizza with that perfect crust. We lucked out and had the last day of the seasonal Asparagus Pizza topped with alfredo, mushrooms, and Italian sausage. However, please do not despair; you will have many options to pick from from their classics to gourmet pizzas, all using their secret formula: a beer-infused crust made in-house. That crust is to die for!

After this wonderful meal we thanked Amanda, the daughter and Director of Marketing. We asked her if the company was named after a Led Zeppelin song; “Bron Yr Aur Stomp.” She smiled and said no, it is Welsh for “Hill of Gold.” By the way, this is not just a tribute to their heritage. The surrounding hills just to the west of them are a popular technical rock climbing area and can become golden with the right light, (The Royal Columns). Before we left for our hike (not rock climbing!), we checked in at their new establishment, Oak Creek Brewstillery. This is where Amanda’s brother Zach and their dad Mike have their newest project. What is a Brewstillery? All sorts of concoctions from spirts and sour beers. The goal is to have the tasting room open in 2023, so you can sample; whisky, vodka, gin, and barrel-aged sour beers. 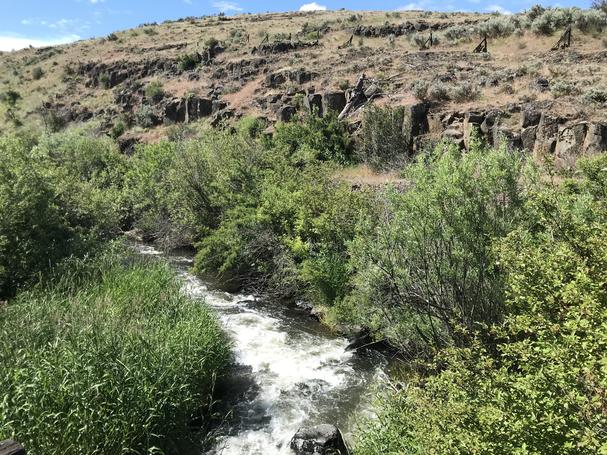 Time to work off some of the calories and hike the 30 miles of trails? Instead of the 30 miles, we decided to do several miles of the flat Cowiche Canyon West Trail off of Weikel Road. There are several reasons for us choosing this section. First and foremost, it is on a former railroad bed, thus flat, and follows Cowiche Creek. Our timing was right to enjoy the excellent flower show. 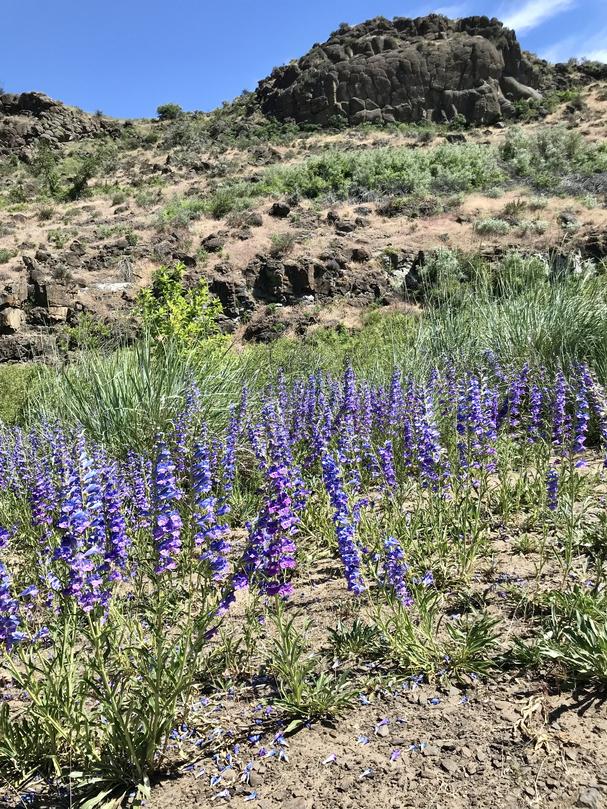 We were lucky as we saw over ten varieties of flowers such as Lupine and Sagebrush Mariposa Lily. However, my favorite was the brilliant colors of the Showy Penstemon. We went several miles on the trail and turned around. We could have proceeded to a winery if we continued; however, we had an appointment for a meal and more beer that we did not want to miss. The winery is 2.9 miles on the level trail, then uphill 0.80 miles. Check out Hiking Beautiful Cowich Canyon.

We concluded the hike and thanked our guide, Cy of Cowiche Canyon Conservancy. Cy’s group manages the vast trail system of three sections: Cowiche Canyon (lowlands), Uplands, and Snow Mountain Ranch. The organization has many outreach programs and is, of course, involved with the conservation of this area.

We told Cy we were going to enjoy some refreshing beer in the area, and he mentioned a fascinating fact that the organic hops that are grown at the mouth of the Cowiche Canyon are used for brewing. Every fall Seattle-based Freemont Brewery uses these hops to release this unique beer.

This talk of beer increased our thirst, and luckily, we were a short five-minute drive to Cowiche Creek Brewing Company. Expansive views of the valley, refreshing beer, and burgers would be forthcoming. I enjoyed the Fickle Blonde Ale, which has some good body and Elizabeth enjoyed the hardy Farmer Way IPA. 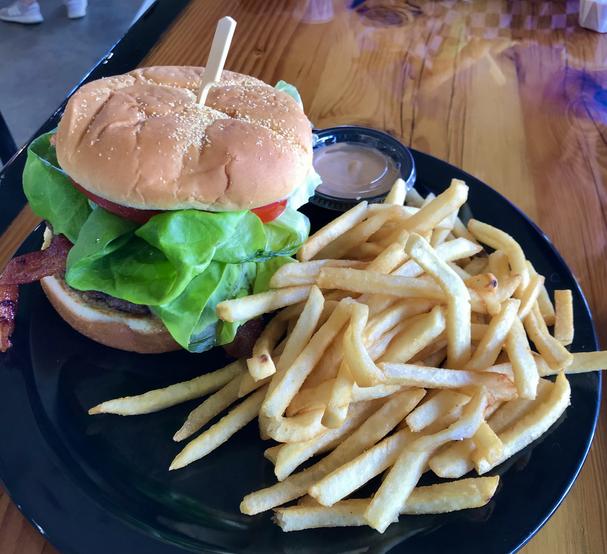 The Bacon Ranch Burger with the house ranch was a big hit. Likewise my Cowiche Club with cured turkey from Cured by Visconti, was so-so tender. Also, you don’t want to forget the tender Sweetheart Ham served on in-house focaccia bread.

While eating, we wanted to talk to brewer and part owner Derrick Norberg. However, he was very busy roaming around non-stop with a phone in one hand and a screwdriver in the other. Funny, I remember seeing a quote from a website a while ago: “Being the brewer often means handling multiple tasks at the same time.” Very true. Hard work is nothing new for Derrick and his wife Maria since they are both third-generation Yakima Valley farmers. Derrick’s family had an apple orchard, and Maria’s family had a hop farm.

Their first batch was in 2012, and construction on the current taproom started in 2015. They also have their house on the property and use hops from their property to make some of the beer. Finally, they also planted 20 acres of barley to be able to produce an estate-grown beer. That is a lot of farming, the labor of love.

We finished the visit to the Upper Yakima Valley and reflected on why this is such an excellent location for hops. 75% of the United States hop crop comes from Yakima Valley. In fact on a worldwide basis, Yakima edged out Germany as producing more hops than anywhere else in the world.

Why do hops grow so well here? Is it the weather or the water? Yes! Long summer days of 16 hours of daylight, combined with warm summer high temperatures close to 87 degrees F. Also, the cool winters are great, so the plant stays dormant. How about water? Although in a dry climate of only 8 inches of yearly rainfall, this is greatly mitigated through the local irrigation district that provides ample water for growers.

One final agricultural note. We would be remiss if we did not mention the importance of this climate is so good for vineyards. There are 6 AVA’s (American Viticultural Area) in the Yakima Valley  In fact, some estimate that nearly 40% of Washington State's yearly wine production is made from Yakima Valley grapes. This was the end of a fun 36 hours in the Upper Yakima Valley. Make sure you follow our continuing adventures in the core of Yakima. Continue reading Part 2 here.

The Guinness QR Code Pint Glass Is a...
Jameson Fink