Swantown Inn | Olympia Bed and Breakfast Retreat is conveniently located near the Washington State capital and Capital Lake, the Woodard Bay Conservation Area, Boston Harbor Marina (a great place to drop in a kayak or SUP), and the paved Woodland Bike Trail System. Before you head out for any of those adventures, you'll really enjoy the gourmet breakfast waiting for you after you wake up. 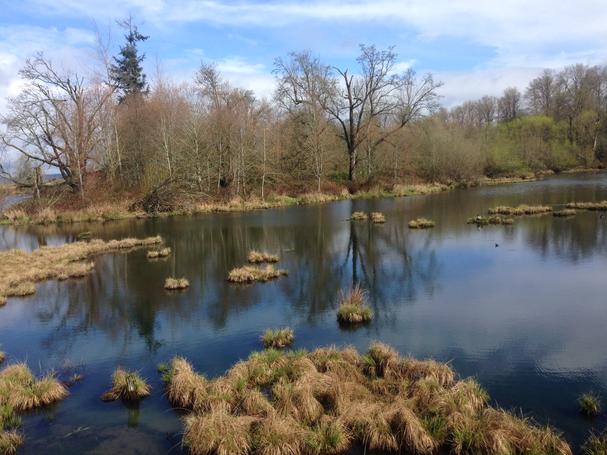 John Swan was born in Scotland and wandered on many jobs through many different countries and eventually ended up on the west coast to try his success at the California gold rush. He struck out there and came to the Olympia area. Like many early inhabitants, he was deeded some land. He became a real estate developer, and eventually, the area east of Olympia became known as Swantown, later named Eastside. Before 1900 there was Swantown Slough, mudflats during low tide separated Swantown/Eastside from Olympia. This was later corrected with landfill when the Harbor was fully dredged.

By land or sea? You can either walk the trails and boardwalk or paddle (during high tide) the Billy Frank Jr. Nisqually National Wildlife Refuge This place is a must-stop, especially if you are coming from the north. It has four miles of flat trails with eight short trails, including our favorite, the Nisqually River Overlook Trail (also called Nisqually Estuary Boardwalk. 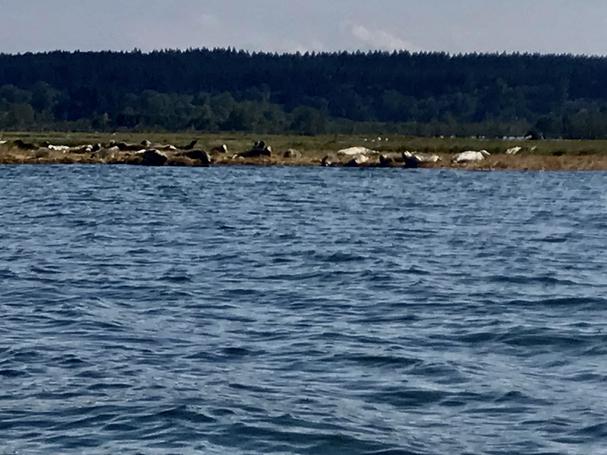 By sea! We had calm winds, and with a high tide (8'), we launched our kayak at Luhr's Landing near the Nisqually Reach (plug in 4949 Dmillhur Dr, Olympia on your device). Of course, first check the weather and tides. Along with the perfect weather, we were blessed with an assortment of wildlife: eagles, seals, osprey, swans, and more seals. 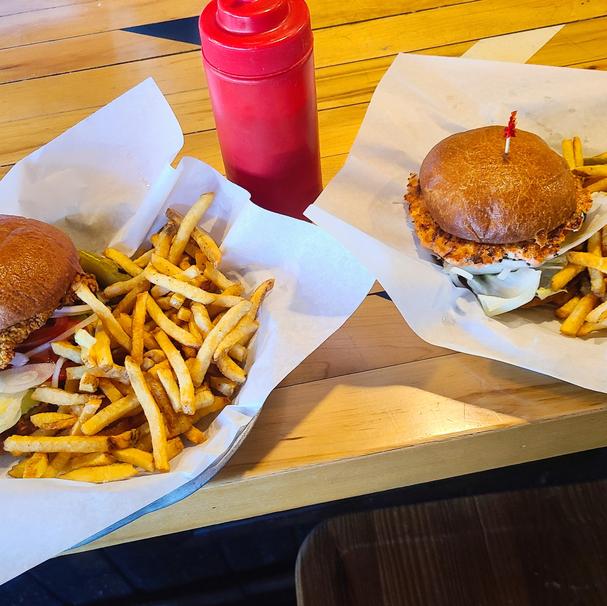 After kayaking, we were ready to take the fifteen-minute drive to check in at Swantown Inn, but we noticed the State and Central restaurant several minutes away. Trust me, we were ready to eat, and the next decision was what to eat: Fried Chicken or Salmon Burger. The decision was a Salmon Burger with house-ground sockeye, tomatoes, lettuce, and ta,rtar. WOW, that was so fresh and tasty. They also had extensive tap offerings of primarily regional microbrews available from Astoria, Oregon, Olympia, Seattle, and Eastern Washington.

We checked into the Swantown to relax. As we drove up to the Inn, the view of the house, with its Victorian/Queen Anne style, told us we were in for a treat. The Inn originally had 17 rooms under its hipped roof. The square tower on the northeast corner extends over three stories and is topped with a finial. The lovely grounds include a gazebo, which looked like a great place for our picnic the next day.

Stepping inside the building was like stepping back in time. All of the rooms have transoms over the doors to enhance the lighting. Our room had a king-sized four-poster bed (so comfortable!), a desk, and a love seat. The bathroom features a beautiful clawfoot bathtub with a matching foot bath! 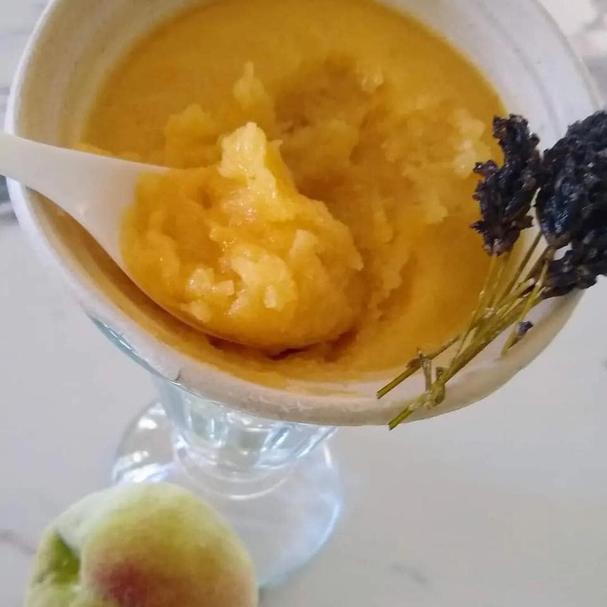 The husband and wife team of Nathan and Casey Allan have been running this Inn for nearly 18 years, and you can see their outstanding teamwork, primarily when serving the three-course breakfasts. It usually starts the evening before when Nathan is baking scones. We later found out that Nathan had training from his grandmother while growing up in Australia. Delicious scones were awaiting us when we arrived at our table. Check out the recipe for Swantown Scones! 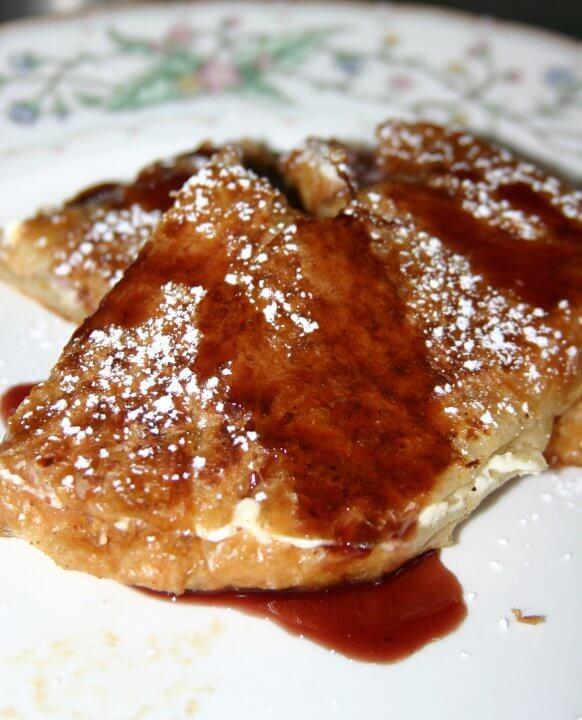 The second course is always a sorbet – today a Peach Lavender Sorbet. The third course was the Decadent French Toast; a killer French Toast highlighted with a Marionberry and cream cheese stuffing and topped with Orange Marionberry Syrup. It was light and filling at the same time.

Nathan brought us a second cup of coffee and chatted about our plans for the day. Although Nathan is a native of Melbourne, Australia, he has done extensive hiking and kayaking in the area over the last 18 years. His wife Casey is local and has similar outdoor interests.

We were fired up from our French Toast to propel us to our first outing, hiking at the at Woodard Bay Conservation Area, a less than fifteen-minute drive away. The hike first takes you through the forest, and at 1.5 miles, you reach the beach with extensive views of Henderson Inlet. Interestingly, you see this pier with a railbed on it standing way out in the water. The pier serves as home for the Yuma myotis (small bats.). Along with the bats, Woodard Bay provides habitat for a vast array of wildlife, including song and shore birds, seals, river otters, and bald eagles, and is home to one of the most significant heron rookeries in the state.

Why was the pier built? During the early 1900's Weyerhaeuser had extensive logging operations at Woodard Bay and the area south of Olympia. Logs were taken via railroad to Woodard Bay and put in at Henderson Inn. Then, through an elaborate process, the logs were put on a raft, and a tugboat would take them north to the sawmill operations in Everett, WA.

We enjoyed resting on the beach for a spell, reminiscing on the past. Then we knew it was time for our second round of activities and took the short drive to Boston Harbor Marina. Boston Harbor in Olympia? Well, that was a brilliant idea by a zealous real estate developer long ago who thought that name would help promote the area. In any event, this is an unincorporated community adjacent to Olympia. The marina rents kayaks and standup paddleboards. However, we brought our trusty inflatable kayak. You want to launch during a higher tide (about 6'), or you will have to slog through muddy tidefalls. 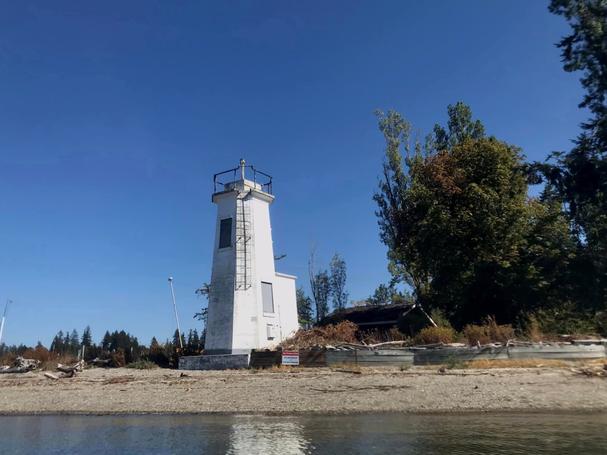 We launched once again in perfect, sunny, and calm conditions and headed a short distance west to Budd Inlet. We went past the historic (1934) Dofflemyer Point Lighthouse, which sits on private property, so the best way to see it is by boat. We continued south and enjoyed the views of the state capital.

After a full day, we were ready to retire back to the Swantown Inn. On this wonderful fall day, we took the goodies we brought for a picnic while lounging in their comfortable Adirondack chairs; hummus, cheese and crackers, a seafood spread, and some wine were delightful. Tired and full, we returned to our room for a very comfortable night's sleep.

Our last meal? Well, our last breakfast for this trip did not disappoint. Scones, followed by sorbet and then the Italian Parmesan Eggs. These baked eggs served on Canadian Bacon and hashed potatoes were another first for us and absolutely delicious.

It was getting close to the time to head home, but I needed to check out the e-bikes they rent. Bikes are available for guests and non-guests. I sat down with Nathan, and he gave several route suggestions. One of the best parts is an extensive dedicated bike/walking paved flat trail less than five minutes away. That is five minutes on a surface street – but it has a nice bike lane. I decided to take the Woodland Trail several miles and then go west on the Chehalis West Trail. Then you can go a short distance to Woodard Bay. The total distance was 18 miles, and gliding on the flat, former railbed was fairly easy, especially utilizing the peddle-assist on the e-bike.

I already have plans to return with my biking friend to check out some of the other bike trails. I will also make sure to enjoy coffee and scones at Swantown's new Espresso Window.