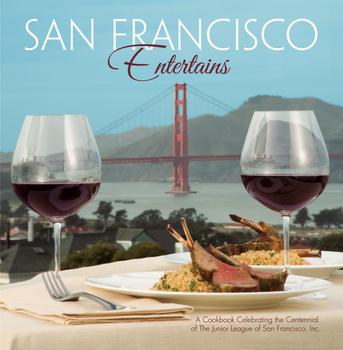 The Junior League of San Francisco (JLSF) is celebrating its centennial in 2011 with an inspired fourth cookbook, San Francisco Entertains, showcasing the food-centric city in all its glory. Contributors include such acclaimed chefs as Chef Gary Danko (Restaurant Gary Danko), Chuck Williams (founder of Williams-Sonoma), Chef Michael Chiarello (Bottega, Napa Valley), Jennie Lorenzo (Fifth Floor), and Chef Ryan Scott (Ryan Scott 2 Go).
The recipes, entertaining menus, and pairings contained within San Francisco Entertains have been triple-tested and narrowed down from 500, each uniquely boasting the freshness, the history, and certainly the tradition of the bay area. Each of the ten chapters captures one decade in the beautiful city.

Foodies will adore recipes like Red Snapper with Green Apple Ceviche and Ancho Chile Brownies, while entertainers will find themselves inspired by the menu ideas for a 49ers Football Tailgate and a Wine Country Cocktail Party.

Go to www.SFEntertains.JLSF.org to order the cookbook, which goes on sale on October 20th! All proceeds from the sale of San Francisco Entertains will fund the Junior League of San Francisco, Inc., an organization of women committed to promoting voluntarism, developing the potential of women, and improving communities through the effective action and leadership of trained volunteers.

Thanks for your sweet comment on my blog! I added the foodista widget to my left column. I'd love for you to direct readers to my post.

Wow! What a great cause and a beautiful cover photo.

Thanks for stopping by our Virtual Pizza Party. We enjoyed having you!

That sounds like quite an event...I will check out the links, thank you :)